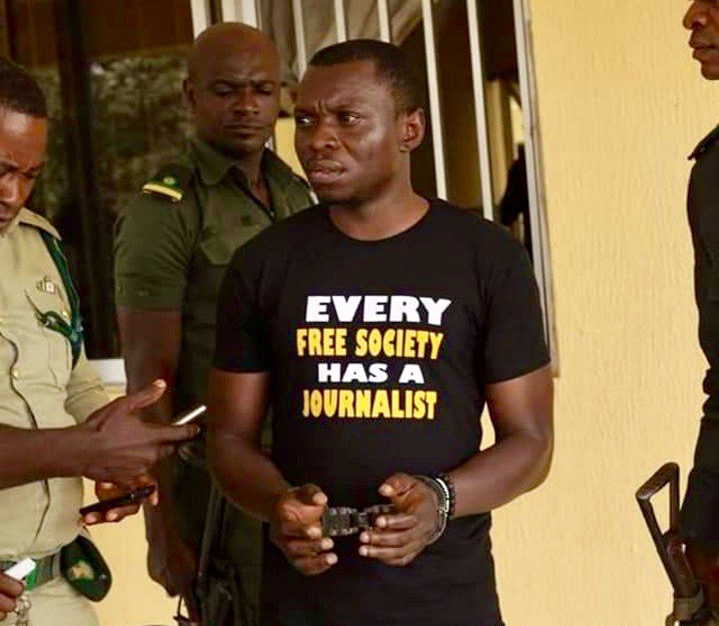 Three years after he was arrested and detained over a publication on alleged corruption, Agba Jalingo, the publisher of CrossRiverWatch.com, a privately owned news website in Calabar, south-southern Nigeria, has been arrested again and detained by the police.

This time, the journalist was picked up from his Lagos home on August 19, 2022, over allegations that he had defamed a sister-in-law of the Governor of Cross River State, Ben Ayade.

Before this third arrest, however, Jalingo had raised the alarm on his Facebook timeline about the Police laying siege to his house.

He had further alleged in the same Facebook post that the police officers had taken his wife and daughter hostage on the floor of his residence and that he feared for his life.

“I don’t know who sent the police but they have held my wife and my daughter hostage downstairs.  I don’t feel safe. Those are their faces”, he posted, sharing a picture of some men in mufti at the gate.

Later, the journalist would claim that the policemen had been sent from Abuja, allegedly on the orders of one Frank Ayade, a brother of the governor of Cross River State, Ben Ayade.

“I have information that the police were sent from Abuja and the command’s CP [Commissioner of Police] is aware. I don’t know what I have done again but I am afraid for my life,” Jalingo wrote on Facebook.

“They are sent by Franko Ayade. They are trying to force their way in right now,” he added.

Not long after Jalingo raised the alarm, his arrest was confirmed by CrossRiverWatch as well as by his wife, Violet Agba, who claimed that the policemen refused to show any warrant or charge sheet before arresting her husband.

It was gathered that the journalist was detained at Alapere Police Station in Ketu, Lagos. The following morning, he was transferred to Abuja, the nation’s capital.

Jonathan Ugbal, an editor of CrossRiverWatch, later disclosed that some security operatives believed to be policemen also laid a siege to the news outlet’s office in Calabar on the same day Jalingo was arrested.

Why the journalist was arrested – Police

A day after the arrest (20 August 2022), the Federal Capital Territory Police Command in Abuja confirmed the incident.

Police spokesperson, Josephine Adeh, in a statement explained that the actions were taken after a petition was filed against the journalist by Elizabeth Ayade, the wife of Frank Ayade, a brother to the Cross River State Governor, Ben Ayade.

“On Saturday, August 20, 2022, [the arrest was actually effected on August 19] Agba Jalingo was arrested by State CID [Criminal Investigation Department] operatives in response to a petition filed against him by one Elizabeth Ayade,” the police statement read.

“He [Jalingo] was arrested over a false allegation, claiming that she [Elizabeth Ayade] paid one Mr.  Pascal to write an examination for her at the Law School.

“Upon the receipt of this petition, we went ahead to invite Mr Jalingo, but he refused to come,  leaving the police no option but to secure an arrest warrant, which was why he was arrested in Lagos,” the police stated.

Adeh added that an investigation was currently ongoing “and the unraveled facts will be communicated subsequently.”

On July 6, 2022, Elizabeth, through her lawyers, Uyi Frank Obayagbona &amp; Co, wrote a letter to Jalingo, asking the journalist and publisher to pull down a post on his Facebook page defaming her character.

In the said post, Jalingo alleged that Elizabeth paid one Paschal Aboh, to impersonate her during an examination at the Nigerian Law School.

Aboh, a law lecturer at the University of Calabar (UNICAL), had been arrested for impersonation during an examination at the Law School in May 2022.

Jalingo’s post read: “Pascal Aboh, the Law lecturer who was arrested at the Law School in Bwari, went to write (sic) that exam for the wife of a prominent politician from Obudu, just wait for the details.

On June 24, 2022, Jalingo, in a Facebook post, shared a response from the Nigerian Law School after he sought an inquiry about Elizabeth and Aboh’s dealings.

Jalingo stated that the Law School declined to provide the details of the candidate who was being impersonated by the arrested culprit. This detail was requested by Jalingo’s media outfit through its lawyer, James Ibor.

Rather, the Law School directed the media outfit to the Attorney General of the Federation.

Aboh, the lecturer, has since been suspended from UNICAL and is being prosecuted at an Abuja court.

Also, Elizabeth has denied the allegation and sought NGN500 million (US$1.2 million) damages from Jalingo.

Her lawyer’s letter to the journalist was entitled: ‘Defamatory publication on Mrs Elizabeth Aami Frank Ayade.’

The letter read in part: “By your said publication, our client’s reputation and personality have been seriously maligned and injured by the defamatory words, the nature of which are deeply distressing and embarrassing to our client and her family.

“Police grant Agba Jalingo bail after hiding him for hours. Released to a relative who signed his bail bond and was asked to report back at the police station on Monday [August 22] morning,” the post read.

Femi Falana, human rights lawyer and board member of the Media Foundation for West Africa (MFWA), said the ongoing harassment of Jalingo based on the allegation that he has defamed the wife of the brother of a serving governor is the height of official impunity in a democratic society.

“Since defamation is not a criminal offence, the action of the police is a flagrant breach of Section 8(2) of the Administration of Criminal Justice Act, 2015 and Section 32(2) of the Police. Establishment Act 2020 which has banned the police from arresting any person in Nigeria for civil. wrong or breach of contract,” Falana said in a statement.

Okechukwu Nwanguma, the Executive Director of the Rule of Law and Accountability Advocacy Centre, also chastised the police for detaining Jalingo.

“Police should avoid portraying themselves as available for hire by politicians or other persons of influence to be used to settle scores. It is not helping the battered image of the police,” Nwanguma  said in a statement.

This is not the first time Jalingo has faced repression at the hands of the first family of Cross River State. In 2019, Governor Ben Ayade caused the arrest of the journalist after he published an article alleging misappropriation by the state authorities of public funds budgeted for the establishment of a local bank. Charged with treason, terrorism, treasonable felony and attempts to overthrow the administration of the governor of Cross River State, Jalingo was remanded in prison in Calabar and released after spending 179 days in detention.

The ECOWAS Court of Justice later ruled that the Nigerian government should pay Jalingo a sum of NGN30 million (US$71,000) as compensation for dehumanising him while in detention.

Jalingo was also arrested in 2021 by officials of the Cross River State Police Command over a planned June 12 protest.

In June 2022, almost a year after the ruling, Jalingo told MFWA that the compensation had not been paid.

Defamation has been decriminalised in Nigeria by judicial precedent, and so people who feel injured by what others say or publish have a remedy in civil action. The police, must know this and resist orders from powerful people to arrest, detain or harass in any form journalist, media organisations and other critics. We demand the police to drop all charges against Jalingo and urge the aggrieved party to seek redress through a civil action, if they feel they have a solid case.