Burkina Faso: Massive Victory for Justice and Fight Against Impunity 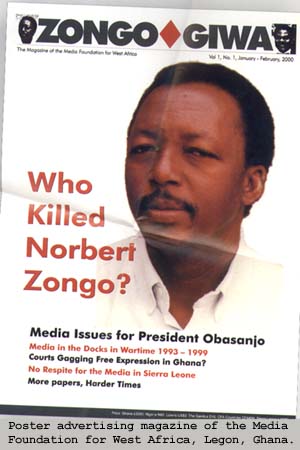 The African Court for Human and Peoples Rights ordered Burkina Faso to implement remedies, including reopening the investigation, and damages in the murder case of journalist Norbert Zongo and his three companions in its June 5, 2015 ruling.

Third, Burkina Faso must publish  the court clerk’s official French summary of the judgment once in its official gazette, once in a widely disseminated daily national newspaper, and on the government’s website for a year. The African Court required circulation of the judgment in order to help ensure non-recurrence of similar violations in the future.

Fourth, within six months from the date of the judgment, the country must report back to the African Court on the status of implementation of all decisions in the judgment.

Following Zongo’s murder, a commission of inquiry on the four murders identified six suspects for prosecution. However, only one of the six, Marcel Kafando, a member of the presidential guard, was charged with Zongo’s murder. He was later acquitted. In 2006, the government closed the case citing lack of evidence as its reason.

This is the second ruling by the African Court on Zongo’s murder. On March 28, 2014, the Court ruledthat Burkina Faso “failed to act with due diligence in seeking, trying and judging the assassins of Norbert Zongo and his companions.” The case was initiated by Genevive Zongo, wife of Norbert Zongo, with assistance from the NGO Le Mouvement Burkinabé des Droits de l’Homme et des Peuples (Burkinabe Movement for Human and Peoples’ Rights).

The African Court was established through the Protocol on the Establishment of an African Court on Human and Peoples’ Rights, which was adopted in Ouagadougou, Burkina Faso, on June 9, 1998 and entered into force on January 25, 2004. Its decisions are final and binding on states that ratified the Protocol.