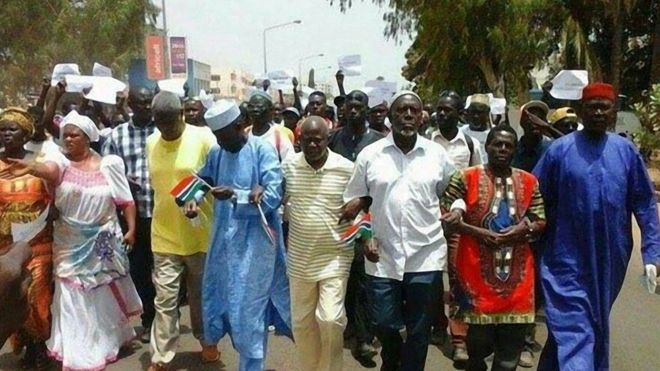 On July 20, 2016, a High Court in The Gambia capital Banjul, sentenced 19 persons to three years in prison.

According to MFWA’s sources, the convicted persons had been in detention since April 16  on seven-count charges of unlawful assembly, riot, incitement of violence, riotously interfering with traffic, holding a procession without a license, disobeying an order to disperse from an unlawful procession and conspiracy.

The convicted persons were arrested on April 16, 2016 following the arrest of and death in custody of senior UDP member Solo Sandeng. Sandeng and over a dozen others were arrested on April 14 while protesting for electoral reforms in The Gambia. Following the arrest and reported death of Sandeng, Darboe and the rest took to the streets to protest but were physically attacked, arrested, detained and subsequently charged.

The MFWA is deeply concerned about developments in The Gambia. Human rights conditions in the country continue to deteriorate further. As the country goes to the polls in December this year, the government of President Yahya Jammeh has made it impossible for any individual to challenge his fifth term bid at the presidency. Individuals require as much as 500,000 Gambian Dalasi (about US$ 11,280) to register a political party or run as a presidential candidate in The Gambia. Apart from being an outrageous figure, economic conditions in the country make it impossible for the average political actor to raise such an amount of money.

Tomorrow July 22, marks 22 years since President Jammeh came to power through a coup. It has been 22 years of severe crackdown on freedom of expression and human rights. We are calling on the African Commission on Human and People’s Rights (ACHPR) which is headquartered in The Gambia to ensure that the continued repression and gross abuse of the human rights of the Gambian people comes to an end. We urge the ACHPR to call President Yahya Jammeh to order and impress on him to respect the rights of his people to freedom of expression and assembly.

The MFWA once again calls on the ECOWAS and AU to, as a matter of urgency, enforce regional mechanisms and protocols on good governance, human rights and democracy and protect Gambian citizens.