Freedom of ExpressionSafety of Journalists
April 29, 2019

May 3, 2019 is World Press Freedom Day. In Ghana, the Media Foundation for West Africa (MFWA) in partnership with the Ghana Journalists Association (GJA) will hold a Stakeholders’ Dialogue on the Safety of Journalists situation in the country.

The Stakeholders’ Dialogue is scheduled for Thursday, May 2, 2019 at 9:00am at the British Council in Accra. It will bring together representatives from the Ministry of Information, government agencies, the judiciary, parliament, state security agencies, media regulatory bodies, media groups, journalists, civil society organisations and academia.

Despite Ghana’s often-touted democratic credentials, attacks on journalists and media workers persist. In 2018 for example, the country recorded several cases of threats, physical attacks, seizure/damage of equipment and arrest/detention of journalists and media workers. Already in 2019, (January and April), the country has recorded five assault cases including the killing of Ahmed Hussein Suale, a member of investigative journalist Anas Aremeyaw Anas’ team; death threats against Manasseh Azure Awuni; brutalities against three journalists of the New Times Corporation as well as attacks on two media houses (Accra-based Radio XYZ and Dero FM in Nkoranza).

Undoubtedly, these attacks and the impunity with which such crimes are perpetrated impugn the country’s reputation and democratic credentials. It also emboldens perpetrators and nurtures self-censorship among journalists and media workers.

Participants at this Stakeholders’ Dialogue will therefore deliberate on the rising spate of attacks on journalists and proffer solutions on securing the safety of journalists, media workers and free speech in Ghana.

The event will be moderated by Journalist and Legal Practitioner, Samson Lardi Anyenini. 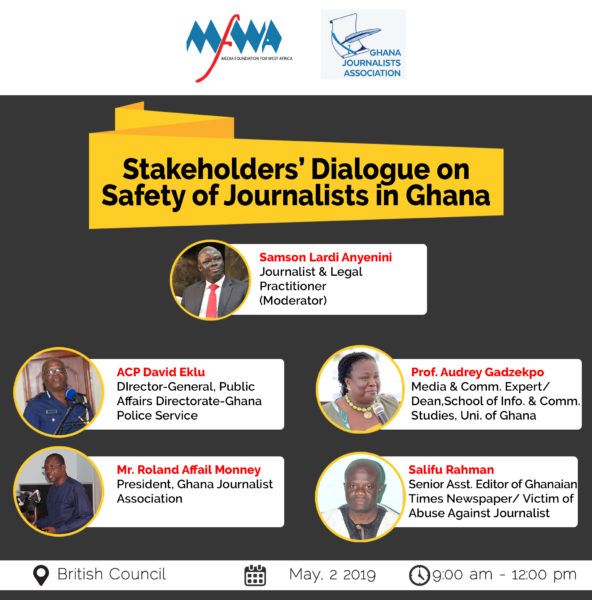