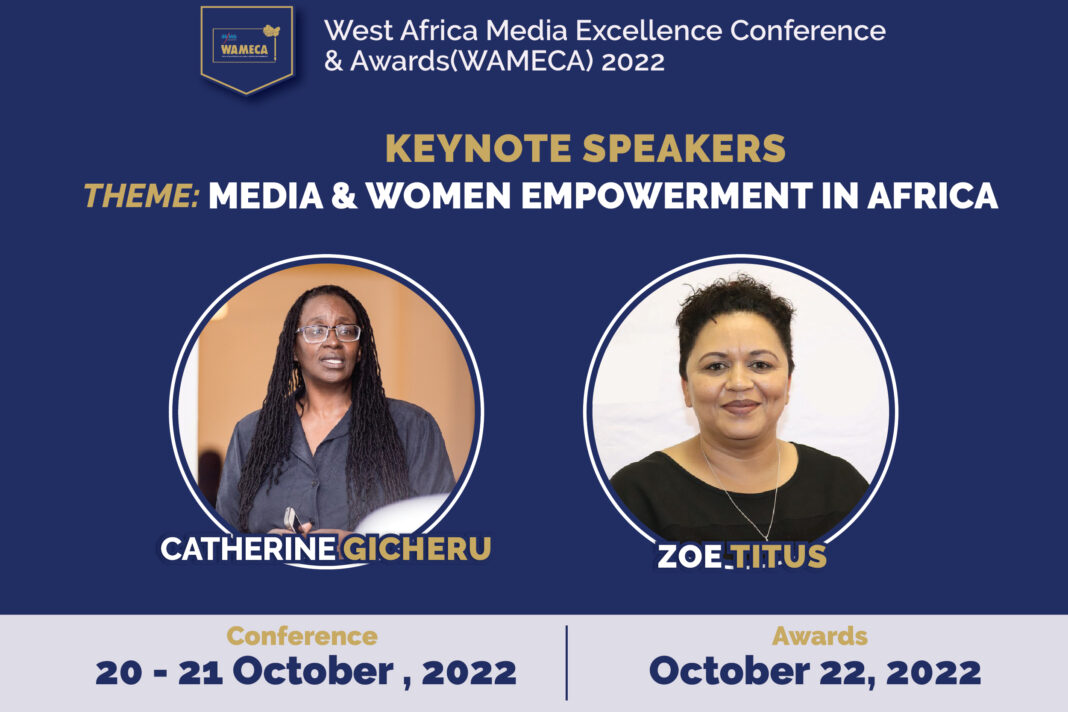 This year’s West Africa Media Excellence Conference and Awards (WAMECA) will be held on the theme: Media and Women Empowerment in Africa.

In line with the theme for this year’s event, WAMECA will host two venerable female media personalities from the fields of investigative journalism and press freedom advocacy as keynote speakers.

WAMECA 2022 will have both Zoe Titus of Namibia and Catherine Gicheru of Kenya addressing participants at the Conference.

Zoe Titus is currently the Director of Namibia Media Trust, and Chairperson of the Global Forum for Media Development, while Catherine Gicheru, an International Centre for Journalist (ICFJ) Knight Fellow, is the Director and Founder of the African Women Journalism Project (AWJP) and former editor of the Nation Media Group – the first female to occupy the position.

Between the two keynote speakers is some 50 years of outstanding media and journalism work on the African continent. They have over the years demonstrated excellent leadership while blazing trails that have not only provided inspiration but created enormous opportunities for a countless number of women.

This year’s WAMECA is scheduled for October 20 – 22 and will be held at Alisa Hotel in Accra, Ghana. It will host a two-day Conference, followed by the Awards event on October 22.

Below are the profiles of WAMECA 2022 Keynote Speakers

With a compelling track record that is fueled by her dedication and passion for impactful media practice, Zoe has in the last 26 years dedicated her professional life to propagating media freedom and development in Southern Africa.

Her track record includes five years of being the Editor of the Namibian newspaper, The Weekender.

She has used her experience in the media to fight for rights, develop a broader intersectional approach to her work and pushed for access to information as the bedrock of all other rights.

Her passion for universal access to information fueled a campaign that birthed the high-level lobby group, African Platform on Access to information (APAI) Working Group – which successfully campaigned for the UN’s recognition of September 28 as International Day for Universal Access to Information.

Zoe Titus has previously worked as a regional director of the Media Institute of Southern Africa (MISA). She has also led a number of projects and campaigns to provide support to journalists whose safety came under threat, with a net effect that there has been transformation in policy environments to support vibrant, independent and free media.

She has also served as the Strategic Coordinator of the Namibia Media Trust (NMT) rising through the ranks to become its current Director. The NMT was the first African organization in 2018 to contribute financially to the sustainability of the UNESCO Guillermo Cano World Press Freedom Prize.

Zoe happens to be the first woman to chair the prestigious international network of journalism support and media development organization, and the Global Forum for Media Development (GFMD), which seeks to hedge journalism as an important tool for public good.

Her in-depth knowledge and experience have led to her serving in advisory capacities on several regional and international initiatives, including the Advancing Rights in Southern Africa project (ARISA). She is also the co-founder of the online teaching platform on media policy in Africa, Jeanette Minnie Memorial Course in African Media Policy in the Digital Age, which is hosted by the Link Centre and Wits online platform, edX.