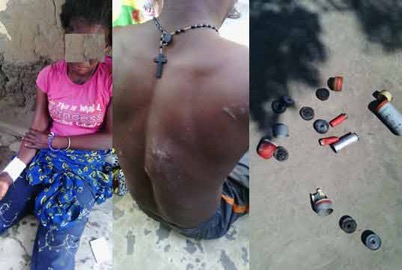 Scores of indigenes of a Togolese community protesting against the activities of a new phosphate mining company on their land have been injured in a brutal intervention by security forces.

The incident occurred on August 22, 2016 at Abobo-Zéglé, some twenty kilometres North-East of the capital, Lome.

The MFWA’s sources say the community has been asked by government to evacuate their homes to resettle at a new place: a bare land with no structures, water or electricity.

“They are dislodging us from our ancestral village in the name of phosphate mining. But they have not provided the necessary facilities at the new site,” Komivi Adékpuivi, an influential figure in the village told journalists.

According to Adékpuivi, anytime authorities promised to meet them to discuss their concerns, they (authorities) did not show up.  “Meanwhile, they are mining right under the foundations of our buildings and raining dust on us,” he added.

Led by their local council leaders, the people therefore organised a peaceful march to draw attention to their plight. However, the security forces went to the scene and descended on the protestors with tear gas and rubber bullets. The security forces reportedly did not limit their brutality to the demonstration grounds as they fired some into people’s homes. This resulted in a melee in which scores were injured either by being trampled on or by the tear gas and bullets.

The injured were later hospitalised and treated.

The MFWA condemns the brutal repression of a peaceful march by vulnerable locals who were only exercising their constitutional right to peaceful assembly. We call on the authorities to investigate the matter and ensure that the victims have redress.