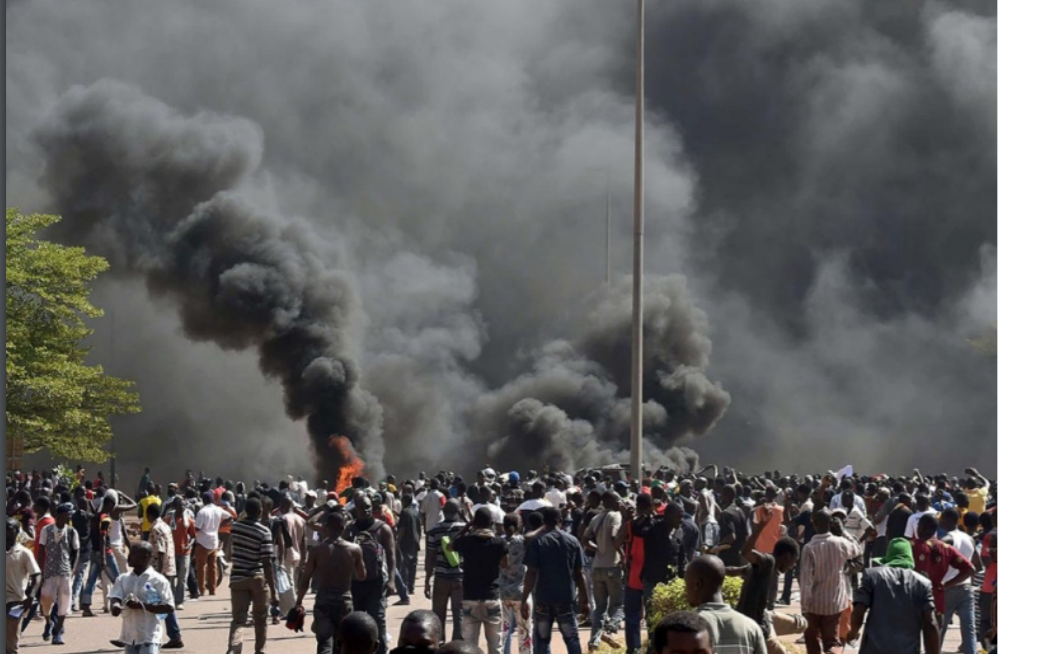 Riots in the streets of Ouagadougou, Burkina Faso, in October 2014. Photo: Day Donaldson

Since 2015, Burkina Faso, once known as a bastion of peace in Africa, has been engulfed in the fight against terrorism which has claimed hundreds of lives and severely affected press freedom. As of 2019, the country had recorded an estimated 283 terrorist attacks claiming 524 lives. Although recent attacks are concentrated in the regions of Hauts-Bassins, Boucle du Mouhoun, Nord, Sahel, and Est, designated as the red zones, terrorist attacks have been carried out in many other parts of the country.

According to the latest United Nation report, on Burkina Faso, the violence triggered a humanitarian crisis uprooting about  486,000 people from their homes. The report further indicated that Burkina Faso has become home to the “fastest growing displacement in Africa’’.

The creeping rise of terrorist attacks in the country, and the ballooning frustrations from the population has set the government’s teeth on edge. Citizens have increasingly begun losing trust in the government’s ability to deal with the threat and neutralise these marauding groups. Political parties from the opposition have repeatedly called on the country’s Prime Minister and the Defence Minister to stepdown for failure to deal with the menace.

In 2019, the Burkinabe government adopted a number of measures to quell the menace. This included the declaration of a state of emergency, the creation of a special task force, and the adoption of a law that criminalises the demoralisation of armed forces through the press. Some of the new law’s article threatens press freedom amid the unfolding security crisis. For example, article 312-15 of the new law, criminalises the publication of “information, images, or sounds’’ of a kind to “compromise an operation or an intervention’’ of security forces against acts of terrorism while Article 312-16 criminalises the “unauthorised publication, by any means, of the images or sounds of the scene of a terrorist offence’’. These offences are punishable between one to five years in jail, as well as a maximum fine of 10 million CFA (about USD 17,000).

Burkina Faso is home to a diverse media landscape comprised of about 87 newspapers (11 dailies, 11 weeklies, 17 bimonthlies, 20 monthlies and 1 bi-quarterly and 27 publications written in local languages), 25 online media outlets, 163 radio stations and 33 television channels. This is the media highly commended for its pivotal role in the social and political uprising that toppled the longstanding President Blaise Compaoré and resulted in several legal reforms.

Today however, the prevailing context of terrorism and ethnic clashes; security threats against journalists and a harsh legislative environment is having a negative toll on the independence of the country’s media industry as key allies in the fight against terrorism; and resulting in a phenomenon of growing censorship among media practitioners.

The Media Foundation for West Africa has been monitoring and engaging with several journalists in the country on how terrorism is affecting the media landscape.

Following the 2014 massive uprising, Cheriff Sy, then head of the transitional parliament, underlined the “need to seize the opportunity to make changes to legislation, real qualitative changes such as the right to access information and decriminalisation. This is an occasion to pass new laws.” The aim was to create a suitable legal environment enabling the media to efficiently carry out its mandate and provide citizens the platforms to express their views. At the time, laws such as the right to access information were adopted and legal provisions limiting the role of the media were repealed.

However, the new law adopted by the country’s parliament in June 2019 represents a serious infringement on freedom of expression and of the press and further violates citizens’ right to information. Several civil society organisations including the Media Foundation for West Africa denounced the adoption of the law that would limit freedom of expression and citizen’s right to information. Even though the government believes these laws would help in fighting terrorism, organised crime, and the spread of ‘’Fake News’’, the situation has triggered among journalists a series of painful flashbacks of the Compaoré regime that considerably cracked down on the media. According to a journalist at Le Reporter, a local newspaper “the media is paying a heavy price in the name of the fight against terrorism’’.

Increasingly, media professionals operating in regions engulfed in the fight against terrorism face threats both from the army and terrorist groups depending on the information they disseminate. A journalist in Djibo has already been once threatened by security forces during an interactive radio programme that he was forced to stop. Another reporter at Bandré, a media outlet in Burkina Faso, in an interview indicated that “the media faces a double pressure depending on who it is perceived to be hailing. When broadcasting about the loss of the armed forces at the forefront of the fight against terrorism, they are forced and verbally threatened to stop broadcasting. And during programmes in which journalists speak against terrorists, which they describe as thugs, the terrorists also threaten them.’’ A reporter at etandard.bf, an online media outlet added that in face of such a complex situation, “even the most reckless journalists’’ do not even dare go into those areas for fear of retaliation from either the army or terrorist groups.

Aside from the threats against journalists, practitioners living in the red zones of Hauts-Bassins, Boucle du Mouhoun, Nord, Sahel, and Est face serious challenges in accessing sources of information. According to a journalist at etandard.bf “even citizens, who are usually the main sources are scared to share information with journalists as they could be caught by terrorists and face consequences’’. For a reporter at L’Economiste du Faso, “Journalists have over their heads a Sword of Damocles which could fall at any time”.

The prevailing context of terrorism and ethnic clashes; security threats against journalists and a Harsh legislative environment in the country has given way to an increased practice of self-censorship among media practitioners who must now be careful of the information they share to the public for fear of being subjected to harsh treatment. Cédric Kalissani, journalist at Mutation, a local newspaper indicated that he was once called for questioning by some officials, following an article he wrote on the inconsistencies in the payments the army’s bonuses.

Several journalists in Djibo, a province in northern Burkina Faso particularly hit by the insurgency, reported that since 2016 their radio station “La Voix du Soum” is recorded by officials during news hours and that following a series of threats, reporting on security issues has stopped. A reporter at Lefaso.net, an online media outlet, remarked that “journalists in the so-called red zones almost do not practice journalism anymore’’.

Respective governments in Mali and Niger have also been battling against the hydra of terrorism and throughout 2019, the Media Foundation for West Africa has recorded no violation or developments in the Media Landscape of both countries in its quarterly Freedom of Expression Monitor. Such a situation could highly be attributed to the growing sense of censorship among media practitioners in both countries.

In the face of these rising challenges, it is crucial than ever for stakeholders to take key measures in curbing the rising threat against the media, and position the media as allies in the fight against terrorism and the promotion of peace and democracy. The MFWA therefore calls for more trainings for the media on conflict sensitive reporting and peace journalism. This would position the media as an enabler of peace in the country. We also urge the media to be circumspect in their handling of terrorism related information in order not to instil fear in communities.

The MFWA also calls on the Burkinabe government to consider the media as an ally rather than a threat. One way could be to include the media in its counter-terrorism strategy for public sensitisation against fundamentalism and extremism.