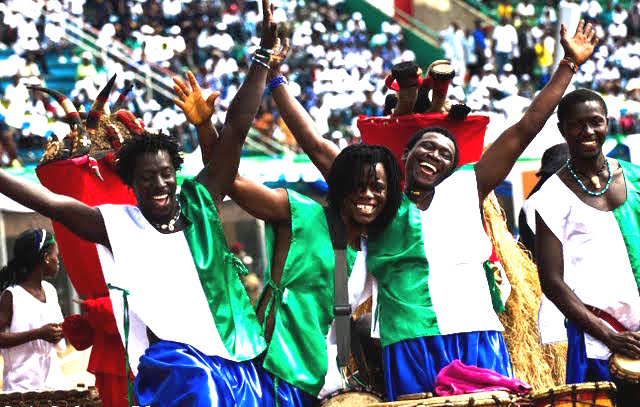 From a relatively peaceful start to electioneering campaigns for the March 7, 2018 general elections, the political atmosphere in Sierra Leone is now deteriorating by the day. Isolated altercations, mostly verbal, have escalated to full-blown exchange of punches and projectiles, leading to some analysts declaring that the country is sitting on a time bomb.

The stakes are very high and the political players are desperate. The ruling All People’s Congress (APC) party is evidently bent on retaining power while the main opposition Sierra Leone People’s Party (SLPP) and emerging vibrant new political parties greatly fancy their own chances. Already, strong campaign languages are being used by politicians from various political parties.

The last few weeks have recorded pockets of clashes between supporters of the ruling party APC and the main opposition party, SLPP.

The violence reached a dangerous height of escalation when the convoy of Julius Maada Bio, the Presidential candidate of SLPP, was attacked as it arrived to campaign at the hometown of Samura Kamara, the presidential candidate of ruling APC. That incident which occurred on February 20, 2018, saw the windscreen and body of Maada Bio’s campaign vehicle pelted with stones and sticks. The campaign programme was as a result called off.

In the face of this escalation, the Police Service proposed a Memorandum of Understanding that would sanction a ban on the movement of people after they have cast their ballot on election day. The opposition has however rejected the “Go Vote and Go Home” proposal arguing that it infringes on citizens’ right to free movement and the law enforcement agencies cannot be trusted to enforce the ban fairly.

Amid all this, Sierra Leoneans are eagerly looking forward to the wards, councils, parliamentary and presidential elections. The anxiety can only be described as fever-pitch.

Amid growing concerns and challenges, the country’s elections organising body, the National Electoral Commission (NEC) continues to assure the populace that all conditions for peaceful elections will be in place and the polls will be held on March 7 2018, as scheduled.

Unlike the security situation, which has grown from good to bad, the state of readiness of the NEC has improved from doubtful to hopeful. About two months ago, the Finance Ministry communicated to NEC that it was going to stop disbursement of weekly funds that were being transferred to the electoral body for the conduct of the 2018 elections until an audit has been conducted into the use of funds so far allocated. Some analysts feared that the move by the Ministry amounted to bullying and had the potential to undermine the independence of the NEC. This was because the audit proposed by the Finance Ministry fell within the remit of the Audit Service and outside the Ministry’s mandate.

Today, that stand-off has been cleared and the NEC seems to be winning public confidence in its ability and readiness to organise credible polls.

The Sierra Leonean media has a very crucial role to play in this election with regards to reporting the activities of elections management bodies like the National Electoral Commission (NEC) and the Political Parties Registration Commission (PPRC). It also has a responsibility to sensitize the public about the electioneering processes. Not much has been done by the media, especially newspapers, in this direction. Partisan political interests and unprofessionalism seem to be reflecting in the editorial outputs of some of the newspapers. A couple of newspapers registered as independent newspapers are evidently associating with political parties from all divide.

Not much of an open allegiance to political parties has been recorded for television and radio channels with the exception of the state broadcaster (SLBC) radio and television, which is supposed to be independent but is rather seen tilted towards the ruling party.

The media appears to be only concentrating on covering and reporting on the campaigns. This has been at the expense of their duty to educate the public, fact-check the claims of the candidates and interrogating them on the key development challenges and aspirations of the people.

Without a doubt, the top media players in Sierra Leone are: the Africa Young Voices (AYV) Media Empire that incorporates the Africa Young Voices Newspaper, Radio, Television and Printing Press, the Media One Centre that incorporates the Standard Times Newspaper, Star Radio and Television and Printing Press, the Sierra Leone Broadcasting Corporation (SLBC) Radio and Television, the Society for Radio Democracy, Awoko newspaper, Exclusive newspaper and the Global Times newspaper.

The AYV media empire and Media One Centre, the foremost private media institutions in the country are owned by private individuals: Anthony Navo (Jnr) and Philip Neville respectively.

The AYV is seen as one of the biggest and professional media currently in the country. The Media One Center is largely seen as professional and independent in its operations although sections of the public believe the editorial policy of the institution keeps changing from one political interest to the other.

Society for Radio Democracy appears to be the most listened to radio especially in the morning hours as it hosts the most popular political show currently – “Gud Morning Salone.” The Global Times and Awareness Times newspapers are registered as independent newspapers but appear to be associating with the opposition SLPP and ruling APC parties respectively.

In spite of the many challenges that the media and journalists face in doing their work, the press in Sierra Leone is relatively free and enjoy a cordial relationship with government. However, the occasional cases of politicians ordering security forces to arbitrarily arrest, detain and sometimes, charge to court  journalists on trumped up charges remain a concern.

There are also cases of occasional censorship attempts on the media by the state. In all these, the media remains resolute in the discharge of their constitutionally mandated role.

It is evident that the media in Sierra Leone is in dire need of capacity development support to enhance their professional output and enable them to efficiently and professionally play their important role in the electioneering process.

The media also needs financial and logistical support such as digital recorders, cameras, computers and other reporting tools to enhance their work. It is therefore recommended to pro-media development and democracy organisations to prioritise supporting the Sierra Leonean media to enable it play its critical role in ensuring a peaceful and successful conduct of the elections.

The media must also endeavor to be professional and to depoliticize its editorial policies to ensure that credible reportage gets to the public to help make an informed decision.

Further, to ensure high collaboration between the media and security agencies before, during and after the elections, it is critical for the two groups to dialogue and fashion out modalities of how the two groups can work together to ensure peaceful elections in Sierra Leone.