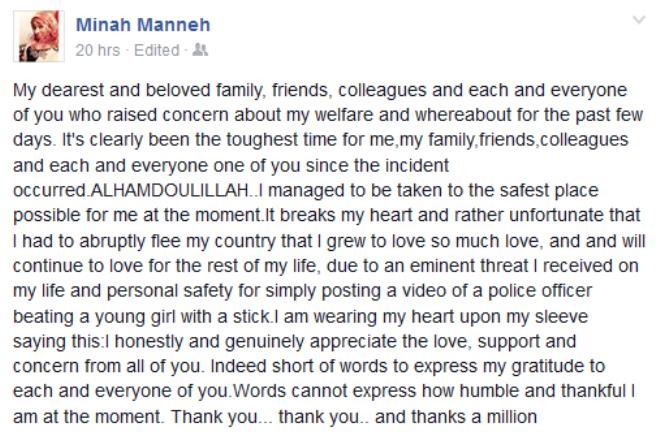 Aminata Manneh, a student at the University of The Gambia and also the mentorship coordinator at the non-profit organisation Think Young Women, has gone into hiding after receiving death threats to her life.

According to the MFWA’s sources, on March 18, 2015, Manneh posted a video of a policeman assaulting a young girl on Facebook accompanied by her statement: “This is a total child’s Right violation. Since when does a traffic police officer have the right to lay hands on a young school girl cuz they were fighting? I mean we all went through this. What has become of our authorities?”

Then she went missing for 48 hours with reports suggesting that she was arrested and detained by President Yahya Jammeh’s notorious National Intelligence Agency.

The MFWA’s sources say she was later released but has since fled The Gambia. After her release, Manneh posted on her Facebook page (Minah Manneh):

“ my dearest and beloved family, friends, colleagues and each and everyone of you who raised concern about my welfare and whereabout for the past few days. It’s clearly been the toughest time for me, my family, friends, colleagues and each and everyone of you since the incident occurred. ALHAMDOULILLAH..I managed to be taken to the safest place possible for me at the moment. It breaks my heart and rather unfortunate that I had to abruptly flee my country that I grew to love so much, and will continue to love for the rest of my life, due to an imminent threat I received on my life and personal safety for simply posting a video of a police officer beating a young girl with a stick. I am wearing my heart upon my sleeve saying this: I honestly and genuinely appreciate the love, support and concern from all of you. Words cannot express how humble and thankful I am at the moment. Thank you…thank you..and thanks a million.”

When the MFWA tried to verify her statement, we were unable to access it. We believe the post may have been deleted or restricted so it is no longer publicly available.

Due to Jammeh’s reign of impunity, it is nearly impossible to promote human rights and respect for FoE within The Gambia. The ECOWAS Community Court of Justice ruled against The Gambia in three FoE-related judgments; however, Jammeh seems to have no intention of complying. As such, the MFWA urges the ECOWAS Authority to exercise its mandate and sanction The Gambia for its persistent non-compliance with its obligations under the ECOWAS treaty.