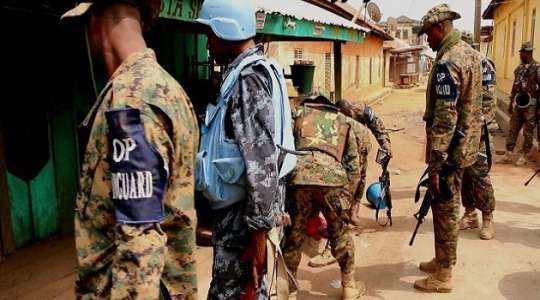 The Media Foundation for West Africa (MFWA) condemns the harassment and assault of a news crew from Kumasi-based LUV FM at a mining site at Manso in the mineral-rich Ashanti region of Ghana by a group of soldiers and private guards.

The crew had accompanied a government Environmental Sustainability Taskforce to report on illegal mining activities in the forest enclave on January 15, 2021.

Reporter Erastus Asare Donkor told the MFWA that the illegal miners called in some heavily-muscled men and military reinforcement to prevent his crew from filming activities at the mining settlement operated by private individuals under military and vigilante protection. He said one of the guards assaulted him and forcibly took the car keys from their driver. Another guard engaged the cameraman, Kofi Asare in a scuffle in a bid to seize his camera which got damaged in the process.

“The guards broke our windscreen and side mirrors. Owner of the site, Donald Entsuah ordered the military to delete all footage from our camera and our personal phones,” Erasmus also told myjoyonline.com, an online platform of the Multimedia Group which also operates LUV FM. He added that their phones were seized and their recordings deleted by the guards.

The crew however managed to retrieve some of the recordings from the memory card after the soldiers had forced them to format it. The media personnel were briefly detained and released following the intervention of officials of the Ministry of Environment and senior officers of the Ghana Armed Forces.

Reacting to the story, the Public Relations Officer of the Ghana Armed Forces, Colonel Eric Aggrey-Quarshie, told the MFWA that the military authorities are investigating the alleged involvement of soldiers in the affair.

“The Armed Forces have not received any official report about the incidents; neither from Luv FM nor the government Taskforce. Nonetheless, we have begun preliminary investigations into media reports of the presence of soldiers at the mining site in order to find out those involved and whether they were there in official capacity. If any wrongdoing is established, we will apply the relevant sanctions under our internal disciplinary code to those involved,” Colonel Aggrey-Quarshie said.

The MFWA strongly condemns the assault on the LUV FM crew who were carrying out legitimate duties. The seizure of the journalists’ camera and forcible deletion of contents their phones is an illegal violation of their digital rights. We are deeply concerned about the role of vigilantes in this drama which is contrary to the recently-enacted anti-vigilantism law in Ghana.

We urge the management of the Multimedia Group to lodge a complaint with the police about the assault on their employees by the vigilantes and to follow-up on the case to ensure justice.

We welcome the proactive move by the Ghana Armed Forces to probe the alleged role of soldiers in the abuse of the journalists and in the entire drama, and advise the Multimedia Group to formally report the incident to the military authorities to facilitate their investigations.