The Media Foundation for West Africa (MFWA) roundly condemns the threats and insults directed at Asmaa James Kamara, the director of Freetown-based Radio Democracy by a popular rapper and his alleged fans.

Alhaji Amadu Bah, popularly known  as LAJ, described Asmaa James Kamara as a “bastard child” and threatened  that “the next time I see you I will piss on your face.”

The threat and abuse were contained in a Facebook video that LAJ posted on December 11, 2021, following Radio Democracy’s extensive coverage of a case in which the artiste is standing trial for causing public disorder and assaulting a police officer. The case was last called on December 6, but the accused failed to turn up, which was also reported by the radio station.

Kamara told RSF that she was “shocked” by the rapper’s insults and that she had received several threatening calls from the rapper’s fans since he posted the video.

“It is unacceptable and criminal to threaten anyone with physical harm. And it is more outrageous when the threat is issued by a popular artiste against a professional journalist doing her reporting job,” said Muheeb Saeed, head of Freedom of Expression at the MFWA.

Meanwhile, we welcome the decision of the rapper to render an apology to Kamara as an important gesture of conciliation. LAJ posted the apology on Facebook on December 13 after he received a barrage of condemnation from the public. Nonetheless, on December 16, the police arrested and detained him on charges of “public insult and misconduct under Sierra Leone’s 1965 Public Order Act.

The MFWA has also learnt that the veteran female journalist and station manager for Radio Democracy has forgiven her bully, who has since been released on bail. Kamara announced the pardon in this open letter: 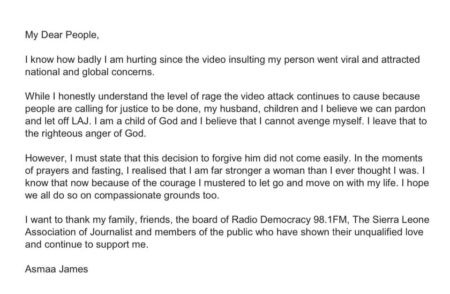 We reiterate our condemnation of the threat and insults by LAJ and urge the authorities to ensure that the law takes its course as far as the criminal aspect of the matter is concerned.