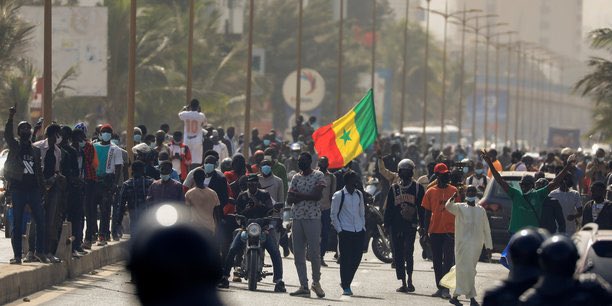 The Media Foundation for West Africa (MFWA) condemns the disruption of social networks in Senegal, the suspension of two television channels as well as the deadly repression of protests.

While also denouncing the violent demonstrators, who attacked other media outlets, the MFWA calls on the Senegalese authorities to ensure that freedom of the press is protected, that media on all sides are safe and independent in their reporting.

On Friday 5th March 2021 morning, network data from the NetBlocks, an organisation that monitors internet and social network access, revealed a mobile internet disruption at the major phone companies Orange and Sonatel in Senegal.

“Metrics show that Facebook, YouTube, WhatsApp, and some Telegram servers were restricted on leading cellular network operator Orange/Sonatel as of early morning Friday. Affected services have subsequently been restored from 7:30 a.m. UTC.” had published NetBlocks.

However, the reason for the observed disruptions has not been ascertained, as neither the cellular network operators nor the public authorities have issued an official statement to this effect. However, evidence shows that an increasing number of governments on the continent are resorting to internet blackouts and blocking of social networks to suppress anti-government protests and restrict online civil and political space.

Earlier, on 3 March 2021, demonstrations broke out in Dakar, the capital of Senegal, and in several other major cities in the country such as Kaolack, Saint Louis, and Casamance. Demonstrations persisted on 4 March. The protests resulted from the arrest of Ousmane Sonko, leader of the opposition political party Patriotes du Sénégal pour le Travail, l’Ethique et la Fraternité́, (Pastef-Patriotes), a deputy in the National Assembly and third in the 2019 presidential elections.

As he was on his way to court to respond to a rape complaint, Ousmane Sonko had been arrested for “disturbing public order and participating in an unauthorised demonstration”.

At least two people were killed by anti-riot forces during the violent repression of demonstrations against Sonko’s arrest. The police and gendarmerie used batons, tear gas, and live ammunition to disperse demonstrators. Sheikh Ibrahima Coly and Sheikh Diop, aged 20 and 17 respectively, died from gunshot wounds.

Other demonstrators were arrested, several others were injured and there was extensive damage to properties. The authorities have not yet released official figures on arrests and the results of the law-enforcement agencies’ repression.

Nevertheless, the Minister of the Interior, Antoine Félix Abdoulaye Diome, had justified the arrest of Ousmane Sonko on the grounds of the ban on gatherings issued because of the Covid-19 and a traffic plan put in place by the authorities.

These two media are considered to be close to the opposition and they are accused by the CNRA of stirring up violence. However, besides the 2STV, the CNRA had warned two other private channels against broadcasting content that “explicitly or implicitly promotes violence”, incites disturbances of public order, or “is likely to constitute a threat to national stability or social cohesion”.

While condemning the disruption of social networks in Senegal, the suspension of the two television channels as well as attacks by demonstrators on other media, the MFWA calls on authorities to probe into the deadly repression made by law enforcement officials and punish the perpetrators.

The organisation also calls on political parties to sensitise their supporters on the need for peaceful demonstrations, which is essential for any democracy, and for the respect of press and journalists’ rights to do their job of informing the public. As Senegal is considered a model of democracy in the sub-region, sanctioning the media under the pretext of “state security” or attacking them for their supposed political sides promises nothing good for the credibility of civil and political freedoms. These attacks call into question the democratic culture that the country has acquired. Violating these democratic values as well as the freedom of expression and of the press, is a dangerous precedent for the country and West Africa. This further has the potential to galvanise other countries that are not yet completely divorced from the remnants of authoritarian rule.