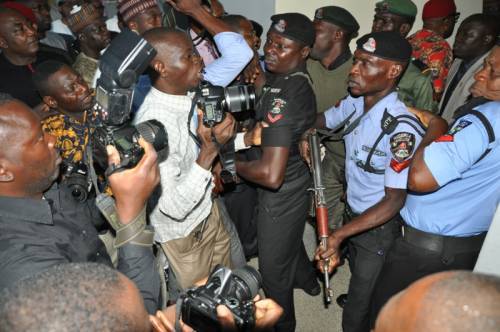 The Nigeria Security and Civil Defence Corps (NSCDC) on January 6 harassed three photojournalists – Olatunji Obasa of The Punch, Olu Aremo of Leadership and Mudashiru Atanda of The Sun – and seized Obasa’s camera.

The incident took place at the headquarters of the National Identity Management Commission (NIMC) in the country’s capital Abuja while the photojournalists were covering the enrolment of citizens in a programme to link their SIMs with their national identification numbers (NIN).

Nigerians who had no NINs prior to the announcement of the policy have been thronging the NIMC offices nationwide to register the number as the government has threatened to block the phone numbers of subscribers who fail to link their SIMs to their NINs by February 9.

As a crowd besieged the NIMC headquarters to register their NINs, Obasa says he and his colleagues saw a woman being harassed by NSCDC officers for allegedly not staying in queue.

As the photojournalists were filming the scene, Obasa said two NSCDC officers stopped them, telling them they had no authorisation to cover the exercise.

“One of the officers threatened to destroy my camera, which he did. He forcefully collected and broke it,” Obasa told MFWA.“Other officers also tried to seize my colleagues’ cameras but he resisted,” he added.

In the end, Obasa says he and his colleagues left the place after some senior officers and NIMC officials intervened in the matter but not without requesting his camera be replaced.

Meanwhile the NIMC has asked Obasa to get his employers, The Punch newspaper, to write officially to report the incident and demand a replacement for the damaged camera. The journalist says in the meantime, he is using his phone to take pictures, which is not ideal.

“Sadly, smartphones have limits in taking pictures. Right now, I have no tool to carry out my daily assignment, but I hope the right thing be done,” he says.

In a phone interview with MFWA, a spokesperson for NSCDC, Mr Emma Okeh, says the corps has meted out appropriate punishment to particularly the officer who broke Obasa’s camera.

“We have taken action on the matter, first, by recalling the officer involved from the beat; and second, by meeting with the photojournalists to know the true situation of what happened. We know that journalists have their job to do; they are stakeholders in the nation’s affairs, so we cannot treat their matter shabbily,”  Okeh assured.

MFWA condemns the harassment of journalists by Nigeria’s security forces who must rather be protecting them in the line of duty. We welcome the decision by the NIMC to replace the damaged camera of The Punch newspaper journalist and applaud the sanctions imposed on the perpetrator by his employers, the NSCDC.