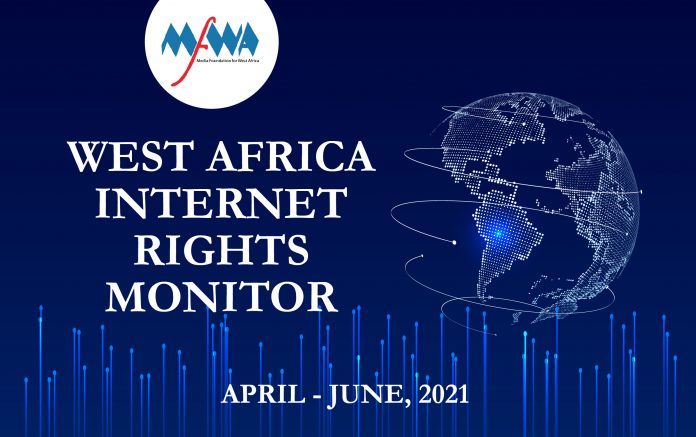 In all, five countries recorded internet rights-related violations. One journalist was arrested and detained in Mauritania for publishing an article on Facebook questioning the use of public funds. A social media activist was killed, one another journalist was arrested and detained in Ghana. One female journalist came under attack through Facebook publication for simply reporting on a politician that presented fake academic credentials to the authorities. In Benin, a political activist was arrested. Besides, Nigeria has been making the headlines of the news and has so far recorded the longest shutdown of a social media platform in the sub-region.

Additionally, several other countries have taken steps to control the free flow of information on social media. For instance, Senegal indicated establishing a monitoring center of social media platforms. While in Sierra Leone, there were heated debates around the adoption of a cybersecurity Bill, considered detrimental to freedom of expression.

But finally, the authorities adopted the law, with an amendment of the provisions considered problematic of the press freedom, freedom of expression online. On the other side, some incidents of a deviant form of internet use were recorded, including the arrest of cybercriminals, detention of a social activist that allegedly propagated fake news in Cote d’Ivoire that led to communities’ clashes, with a death fatality. Victims of internet rights violations during this second quarter were the vast users of the Twitter platform in Nigeria, where the platform was banned.

All the violations recorded during the period under review were perpetrated by state officials, state security agencies, and individuals.

The report features other developments related to digital rights, and end with some recommendation to ensure the protection and promotion of internet rights, freedom of expression online.