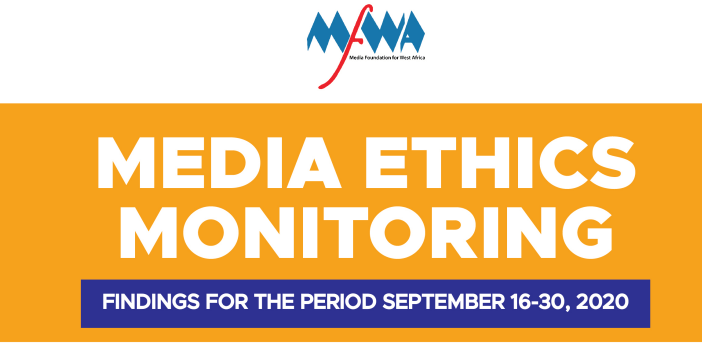 Pro-partisan radio stations, Oman FM and Power FM have emerged with the highest incidents of media ethics violation for the period of September 16-30, 2020.

This is contained in the report on media ethics monitoring, a project by the Media Foundation for West Africa (MFWA), which monitored 26 news organisations made up of 10 Akan language radio stations, 10 newspapers and six news websites.

The most violated ethical principle was Decency followed by Accuracy and Good Taste and Public Sensibilities.

Some of the observations from the report were the intentional misreporting and efforts by show hosts and news anchors at misinforming audience on the voter verification process.  Also, some newscasters and hosts of political talk shows appeared indifferent when some of their panellists and interviewees used unethical language on their platforms.

Another observation is the high occurrence of insults and attacks on personalities of opposition politicians on the pro-partisan radio stations. These attacks ranged from unsubstantiated allegations, disrespect of the privacy and outright insults against their opponents.

The principle of Accuracy was among the top three most violated principle for the monitoring period. Many of the incidences of inaccuracies were cited on news bulletins and political talk shows. This is particularly worrying because news presentation must be factual and accurate.

The monitoring of media ethics is part of a project titled: Enhancing media professionalism to inspire public confidence and support for press freedom in Ghana being implemented with funding support from the Embassy of the Kingdom of the Netherlands. The objective of the project is to identify and highlight incidents of ethical infractions and draw attention to such breaches as a way of fostering adherence to ethical principles by media organisations.