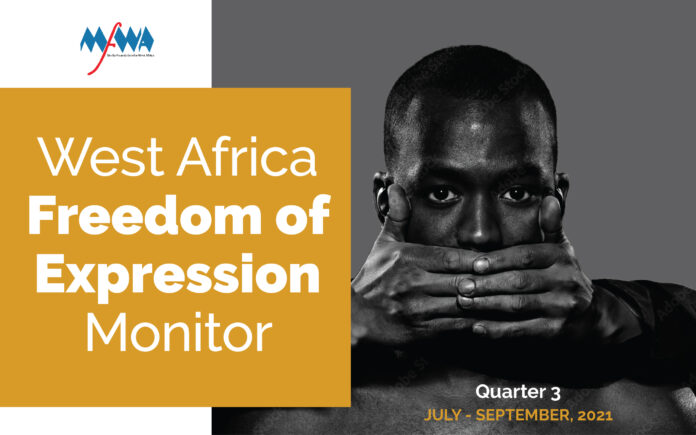 Twelve Freedom of Expression (FOE) violations were recorded in the third quarter of 2021 (July-September) in seven countries, one of the lowest figures recorded in recent years. It represents a 57% decrease compared to the second quarter (June-August) violations which stood at 28. The drop was largely driven by the fact that Nigeria, which often records a lot of violations, was on its best behaviour, with only two incidents reported in that country.

Guinea recorded the most violations (four) while Mauritania and Nigeria followed with two violations each. Ghana, Liberia, Mali and Sierra Leone recorded one each.  Burkina Faso, Benin, Cote d’Ivoire, The Gambia and Senegal which were featured in the previous report, did not record any violations during the quarter under review.

While the previous quarter recorded the killing of three journalists, two citizens and a social media activist, this quarter recorded the killing of one journalist, but under circumstances not related to his work. Syed Taalay Ahmed, 31, from London-based Muslim Television Ahmadiyya International (MTA) was shooting a documentary in Northern Ghana when he was attacked, according to the police, by armed robbers.

In a major push against impunity, the ECOWAS Court of Justice on July 9, 2021, ordered the Nigerian government to pay journalist Agba Jalingo the sum of 30 million naira (USD 73,000) as compensation for subjecting him to dehumanising treatment in detention.  The Editor of the CrossRiver Watch online newspaper was arbitrarily detained for months in 2019.

State of Internet Freedom in Liberia 2021