Ghana: Sports Journalists at the Mercy of Hooligans 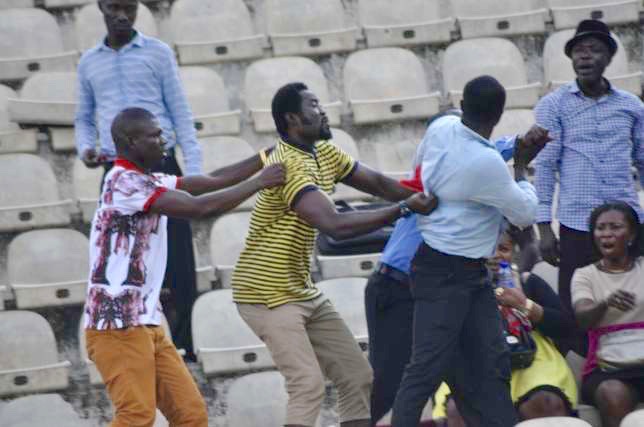 The MFWA has observed with deep concern the recent acts of violence against sports journalists at the various Ghana Premier League (GPL) centres across the country. By the 5th match day, and within just a month of its commencement, the 2017 league had already recorded three incidents of violence against media personnel.

The latest incident involved threats and verbal assault on photojournalist, Senyuidzorm Adadevor, at the Accra Sports Stadium during the Accra Great Olympics-WAFA match on March 5, 2017. Instigated by officials of Olympics, the assault represents a new low in repulsive behaviour towards journalists at the various league GPL centres.

Adadevor told the MFWA that she was taking photographs of the two teams as they emerged from the tunnel when she was jolted by an angry order to stop filming.

“When I turned, it was Fadi Fattal. [Vice Chairman of Olympics] He said I have been giving them bad press of late and so I should quit,” Adadevor said.

With the support of a police officer, Adadevor resisted Fattal, who left in a fit of anger, but only for Olloboi Commodore, General Manager of Olympics, to storm towards the photojournalist and order her to get away.

“His angry outbursts incited the fans and they began hooting at me and threatening me from the stands,” the journalist narrated to MFWA.

Eventually the match commissioner, M.D Arthur, intervened. After verifying Adadevor’s accreditation, Arthur ruled that she should be allowed to do her work. But Commodore created a scene by stomping and threatening, which incensed the crowd the more.

“Some were trying to scale the fence, while others massed up at the gate to the arena which a steward was about opening for them. Given the imminent threat, the commissioner advised me to leave for my own safety. As the police escorted me out, the fans continued to yell and threaten. I was frozen with shock,” Adadevor lamented.

This incident reflects negatively not only on the image of Great Olympics but also of the GPL as a sporting brand. Not surprisingly, the abuse drew widespread condemnation from the sporting public, including the Sports Writers Association of Ghana (SWAG) and the Professional League Board, (PLB).

Unfortunately, the management of Great Olympics has shown no remorse. The club’s General Manager, Olloboi Commodore has reportedly called the bluff of journalists.

“If journalists have decided to boycott our games, that is their right. People said they were boycotting the inauguration of Trump. Some did but he is still the president,” Commodore is reported to have said in an interview on Class FM in Accra.

Unfortunately, that same match day witnessed another act of hostility towards the media during the Aduana Stars – Hearts of Oak match at the Oseadeyo Agyemang Badu Park at Dormaa Ahenkro. Journalists Felix Romark and James Sowah were forced to work from the stands after they were accosted and physically prevented from entering the press box by a section of the home fans. The police looked on as the two, who are social media promoters of the Ghana Premier League (GPL), were molested.

Earlier during a PGL Match Week 4 encounter between Ashgold and Asante Kotoko in Obuasi, a photojournalist of the Asante Kotoko Express newspaper was subjected to physical and verbal abuse by a fan and a steward of the home team. The attack happened while the journalist was performing his duties.

These are by no means isolated incidents. On the contrary, they are part of a series of violations against sports journalists that is gradually becoming a subculture of Ghanaian football.

Last season, three ugly incidents were recorded at different premier league centres. At the Tema Stadium, a policeman kicked and slapped Samuel Addo of Happy FM during the Inter Allies-Asante Kotoko GPL match on July 9, 2016. Addo, who covered the match from outside the press area, had just joined his colleagues in the arena for post-match interviews when the police officer pounced on him. The policeman later said he took Addo for an intruder, although the journalist was wearing press and accreditation badges.

On July 20, 2016, Hearts of Oak fans attacked a freelance journalist, Samuel Boakye-Buckman shortly after the Hearts–Berekum Chelsea GPL match at the Accra Sports Stadium. The journalist was making his way to the post-match press conference when a group of fans accosted him. Accusing Boakye-Buckman of criticizing their club in a Facebook post, the fans physically assaulted him. The journalist emerged from the fracas with a sprained wrist.

The third incident during last season, which occurred at the Baba Yara Stadium in Kumasi, saw two journalists from Jem FM, a Kumasi-based private radio station, being assaulted by angry fans while they were running a live commentary on a match between Asante Kotoko and Dreams FC on August 7, 2016.

For describing a penalty awarded to Kotoko as “dubious”, Gomes Pageh was punched, slapped and kicked about by a group of Kotoko fans. The assailants thereafter turned their hostility on Emmanuel Tinkorang who had taken over the commentary when his colleague was being attacked.

If this is the picture at the premier division of Ghana football, one can imagine the mayhem at the lower levels. The MFWA finds it a painful irony that sports journalists, who promote and generate excitement in the GPL through their match previews, reviews, reportages as well as live voice and text commentaries, have become the target of outrageous and unprovoked attacks at the various match venues.

We therefore join the Sports Writers Association of Ghana and the Professional League Board in condemning the spate of attacks on sports journalists performing their legitimate duties at the various stadia. The MFWA is baffled that security officials condone and, sometimes, perpetrate such attacks themselves. We also find it intriguing that the perpetrators of these attacks on journalists do so with total impunity, as there are often no arrests, not to mention prosecution, for such crimes.

The MFWA appeals to the Managements and the leadership of the supporters’ unions of the various clubs to embark on a vigorous campaign of sensitisation to get football fans to appreciate and respect the crucial role journalists play to promote the sport.

We call for a stakeholders’ meeting involving the PLB, the Premier League clubs, the supporters’ leadership, the security agencies, the National Sports Authority and the media to adopt measures to end the siege against journalists at the various league centres.