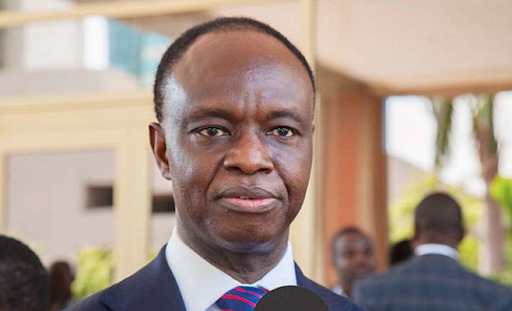 On July 22, 2020, the Media Foundation for West Africa (MFWA) filed an Access to Information request to the National Communications Authority (NCA), the regulator of Ghana’s frequency spectrum. We did so in exercise of our right under Article 21(1)(f) of Ghana’s 1992 Constitution and under Ghana’s Right to Information Act 2019, Act 989.

Our request sought for four main pieces of information, which ordinarily should have been proactively publicised by the NCA. For purposes of clarity and understanding by the public, below is the set of information we requested:

In our request letter, we indicated we would like the requested information compiled in PDF format and delivered to us through email we should be invited to pick up hard copies or any other format. We also added that Pursuant to the provisions of Act 989, we would be grateful to receive the requested information within Fourteen (14) days on the receipt of the letter.

The NCA acknowledged receipt of our letter on July 22. It, however, ignored our request as the 14 days passed and there was no word from the Authority. Keen on asserting our rights under the Law, we followed up on our request with another letter on August 18.

On the same day of our follow-up letter, the NCA responded with two different letters via email.

The first, signed by the Director-General, Mr. Joe Anokye, basically said the Authority was not going to provide the explanations requested in point (3) above and that in respect of the other requests, the Authority was in the process of assessing the requests for further action.

The second letter, which was signed for the Director General by the Acting Director (Legal), Dr. Poku Adusei, requested that we pay a whopping amount of GHC 2,000 “as per Section 82 (1) (b) of the Electronic Communications Act, 2008, Act 775, to enable us generate the Search Report.”

We found the demand for, as high as, GHC 2,000 very exorbitant, unaffordable and quite contrary to the provisions on fees in the Law under which we had made the request, the Right to Information Act, 2019, Act 989. Besides, we found the amount to be exorbitant because the information requested is or should already be in the custody of the Authority and we had indicated our preference for soft copies to be sent to us through an indicated email address.

Subsequently, however, the NCA’s Acting Legal Director, told the public via social media publications that the Authority was even lenient to have charged GHC 2,000 for the requested information. According to him, this was because, per MFWA’s request, we were seeking to “turn the NCA into its research unit,” because as he put it, what we were seeking was a search report from the NCA it to answer questions on company names, location, operational status etc. He ended by indicating that producing what we had requested involves “research and sweat.” 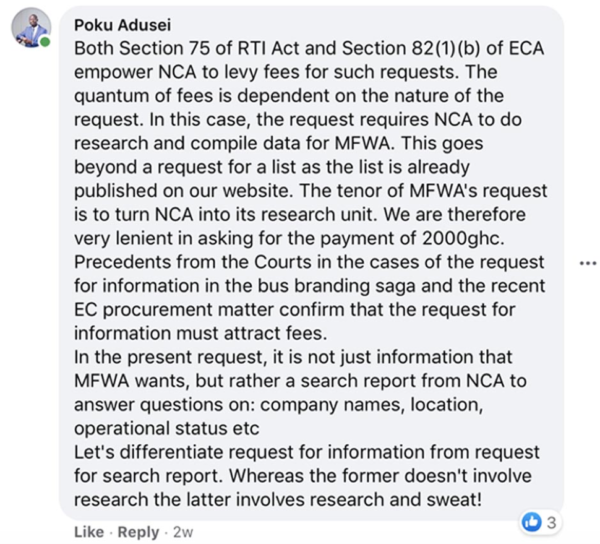 Contrary to the assertions by the Acting Legal Director of the NCA, the Authority has on its website the full list of authorised FM stations as of the second quarter of 2020. That data contains the names and address of companies, their locations, frequencies and operational status of all the authorised FM stations in the country. Below is a screenshot of just a page of the data containing the list of all Authorised FM stations in the country as of second quarter 2020, as published on the website of the NCA. In the case of the list of television stations, the NCA has its website a similar data and in the same format as the table below. Note that the data as published by the NCA in the format below does not provide information on dates of first authorisation and dates of last authorisation renewal, which is the only additional information we sought in our request in relation to the list of authorised FM and TV stations. 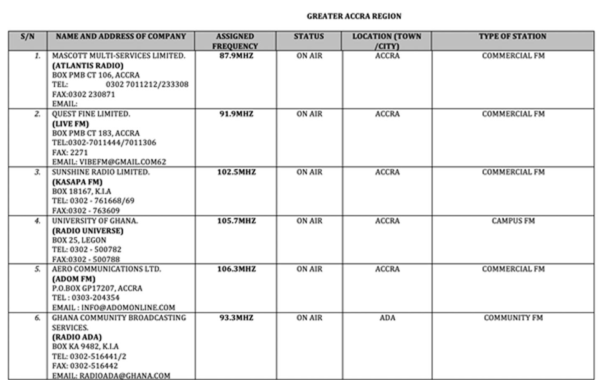 So, if the NCA has this data published on its website, why will their Director of Legal, Dr. Poku Adusei, be telling the public that providing the information the MFWA requested will involve “research and sweat?” If the data, as shown above, contains the names and address of companies, location, frequencies and status, why will the NCA have to engage in research that will make them sweat before they produce the same information? The only additional thing we asked for, was the inclusion of the dates of first authorisation and dates of last renewal authorisation, which is critical for the purpose of our request.

Is it the case that the information that the NCA has published on its website containing the names and addresses of companies of all authorised FM and TV stations, their frequencies, locations, etc, is not authentic and they will need to do research and sweat to find the correct information? If that were to be the case, then we are in trouble with regard to the management of our spectrum. Or is it that the NCA cannot find the dates on which the stations were first authorised and the dates on which they renewed their authorisation? If that were to be the case, then again, we are in trouble. But if none of the above is the case, then why should it cost us a whopping GHC 2,000 under an RTI Law, to receive the information requested via email? Or is it the cost of data for sending the email?

The other piece of information we requested for was the full list of radio stations that the NCA had shut down following its 2017 FM spectrum audit and in line with the 2018 decision of the Electronic Communications Tribunal. Producing this list will require research and sweat on the part of the NCA? Does it mean does not have a record of radio stations it had shut down?  If this were to be the case then, once again, we are in trouble with how Ghana’s frequencies are being managed.  And we ask again, if the NCA has the list, why should it cost us a whopping GHC 2,000 under Ghana’s RTI Law, to receive the list via email? Or is it the cost of data for sending the email?

Let’s remember that we made the request under Ghana’s RTI Law. Yes, the Law makes provision for the payment of fees. But even so, as observed by the RTI Coalition in a recent statement:

“Exercising a fundamental human right such as the Right to Information should not be costly; otherwise it is no more a right. It is important for Public Institutions to bear in mind that, public information is already paid for by taxpayers and therefore charging requesters to search for public information is tantamount to double charging.”

The Coalition further pointed out poignantly that: “This is why section 23(3)(d) of the RTI Act provides that “Where the Information Officer decides to give access; the notice shall state the prescribed fee for the REPRODUCTION of information”. The Act goes ahead to provide under section 75(2)(c) that “Despite subsection (1), a fee or charge shall not be payable for the REPRODUCTION of information which is in the public interest.”

In defence of our right to access public information and in the interest of the public to assert same, we will continue to struggle to access the information requested even if it will mean going to the Court of law to assert this right. Money should not be a barrier to public access to information. The RTI law must be respected.

In part two, we will tell more of the deception and more reasons why what we requested for should not cost us a whopping GHC 2000 to have access.