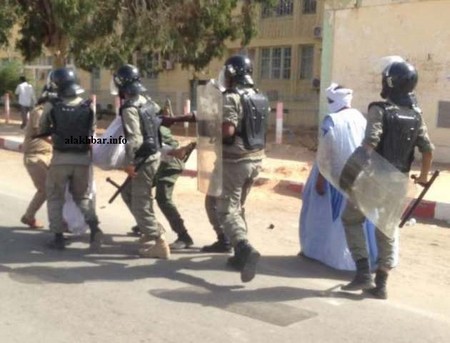 Police in Mauritania have physically assaulted journalists covering a demonstration in the capital, Nouakchott and arrested three of them. Ahmed Ould Moustapha of  Alakhbar  newspaper and Haiba Ould Cheikh Sidaty of the paper’s online platform, as well as Souleymane Dicko were beaten with truncheons by the police and subsequently arrested while covering demonstrations on November 10, 2017.

The demonstrations were in protest of the decision of an Appeal Court in Mauritania to overturn a death sentence pronounced against a blogger, Mohamed Cheikh Ould M’kheitir.

The MFWA’s correspondent in Mauritania says there was no immediate indication as to what provoked the police attack on the three journalists.

This is the second time in a month that journalists have been attacked in a similar circumstance in the country. On October 6, 2017, Mauritanian police seized the cameras and other recording apparatus of journalists who were covering their assault on protesting senators near the Senate house in Nouakchott.

The latest incident has been condemned by the journalists’ trade union in Mauritania, Syndicat des journalistes mauritaniens (SJM), which also expressed support for the victims.

“SJM also expresses its total solidarity with the journalist victims of the excesses of the security forces, denounces the practice of obstructing journalists’ work and finally, urges the government to respect the gains made in respect of freedom of expression in the country.” The union said in a statement.

MFWA joins SJM in condemning the police brutality against the journalists as an attack on press freedom and on Mauritanian citizens’ right to information- two key values of democratic societies. We urge the authorities to clamp down on the growing incidents of police hostility against journalists.