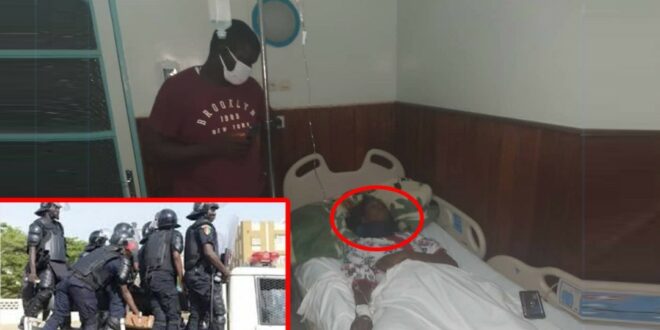 We have learnt with dismay and indignation that camerawoman Adja Ndiaye from Dakaractu was brutally beaten up by the Police on Monday, September 28 in Dakar.

The Dakaractu team, like other media, were at the Police Directorate located in the Medina district, to cover the case of the activist Dj Malick who, on Monday, was summoned by from the cybercrime brigade.

From the first-hand witnesses who testified to Synpics, it appears that it was after the address of Fatima Mbengue of the Frapp France Dégage movement, that the police came to control the journalists, ordering them to leave the premises of the General Directorate of the Police.

Thereupon, the press complied and moved to the Porte du Millénaire, in order to cover the speech of Dj Malick, “luttons contre l’indiscipline des sénégalais” [let’s fight against the indiscipline of the Senegalese], a Facebook movement which issues alerts on certain acts of misbehaviour observed in the local public space.

It was when the journalists had Dj Malick addressing them, that the police returned, and addressing the group that had formed, prohibited them from gathering in the public space.

While the journalists are packing up their equipment, an officer of the GMI pounced on the Camerawoman from Dakaractu, and gave her a vicious blow before pushing her to the ground. Her camera extensively damaged, the victim protested and was arrested by the whole pack of police officers present at the scene.

According to the testimonies of several journalists present, the journalist was handcuffed, beaten, insulted like dirt by the horde of security agents, with the support of an ASP (Public security agent not clothed with the right to use violence).

Not satisfied, the police officers would arrest all those who had drawn their phone to film the incident, ordering them one by one to delete the pictures and videos.

This and several other violations are unworthy of a country like Senegal and, moreover, occurred on September 28, World Access to Information Day.

By forbidding journalists from doing their work at the premises of the Police Department, the security agents erred out of zeal and thereby violated press freedom and freedom of expression.

By forbidding them a second time at the Place du Souvenir Africain to hold out their microphone, they the security agents perpetrated a second violation of the most fundamental rights in addition to the freedom to freedom of movement as enshrined in all laws and treaties in the world.

Finally, by physically assaulting a camerawoman, a woman, to the point of causing her injuries as medical examinations revealed, the Senegalese Police through some of its officers, has once again dealt a serious blow to the freedoms enshrined in our democratic regime.

Last but not least, by torturing our colleague Adja Ndiaye, and by using threats to erase the videos of witnesses, the agents once again seriously undermined the principles which make Senegal a country of freedoms.

Faced with this situation, the Synpics, which informed both the Director of Public Security and the Minister of the Interior, condemns with all the rigour it deserves these acts that smack of dictatorship.

Concerned with the state of the victim of these barbaric acts, the Synpics is following with distressed attention the evolution of her state of health and holds the State of Senegal responsible for all that could happen to Adja Ndiaye.

Our colleague, currently hospitalised in a local clinic is the umpteenth media woman to be victim this police excesses this year.

The Union expresses its full and complete solidarity with her and will join her to take all appropriate legal action in this case.

We remind law enforcement officials that the coercive power, if necessary, which is granted to them to the point that they can use legitimate violence to maintain order, derives from the ACT.

That there can be no room in a Republic for officers to assume that their uniform gives them a license to beat or humiliate with impunity by using violence under the cover of their status as public security agents.

The recurrence of acts of aggression against journalists (Touba during the Covid, Place de l’Indépendance, Guy Marius Sagna’s walk on Boulevard de la République) does not make us deserve our place in the top 50 countries in terms of press freedom.

The police must, just as they did recently at the Mbour fishing quay, deploy all their resources to protect citizens, including journalists, and not violate them gratuitously.