The GambiaFreedom of Expression
April 27, 2017 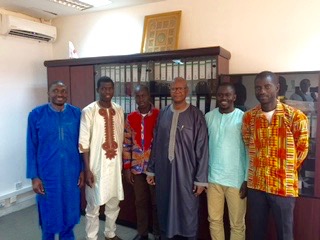 The Gambia Minister for Information and Communication Infrastructure, Honourable Demba Ali Jawo, and Permanent Secretary, Lamin Camara, on Friday April 21, 2017 – received members of the Executive Board of the Gambia Press Union (GPU).

The courtesy visit by the GPU was aimed to discuss issues relating to press freedom and media development in The Gambia.

During the meeting, the Ministry and the GPU discussed at length, and arrived at common grounds, on a number of reforms on laws and policies that affect in particular the operations of media in the country. The Ministry and the GPU, therefore, agreed to work closely in conducting the reforms.

The GPU also took the opportunity to brief the Ministry on its upcoming commemoration of this year’s World Press Freedom Day,  will feature a march pass, symposium and national journalism awards.

The Ministry was also updated on the GPU’s ongoing projects sponsored by the National Endowment for Democracy, United Nations Democracy Fund, EU-UNESCO, and Danish Government through GAMES.

The GPU indicated that through these projects is it planning on implementing, the GPU will be able to improve journalism education and practice in the country, as well contributing to create an enabling environment for freedom of expression in The Gambia.

The GPU delegation was led by the President, Bai Emil Touray, accompanied by two of his assistants Namory Trawally and Modou Kanteh, as well as Secretary General, Saikou Jammeh.