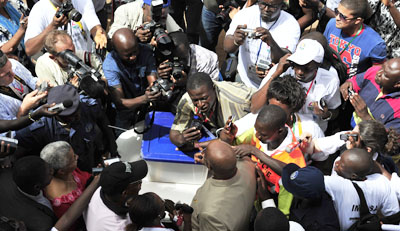 The Media Foundation for West Africa (MFWA) in collaboration with the partner organisation in Guinea, Association Guineenne des Editeurs de la Presse Independante (AGEPI), is organising a Media – Security Agencies Forum to promote the safety of journalists in Guinea.

The Forum is being organised on October 28, 2019, as part of the MFWA’s activities to mark the Internal Day to End Impunity for Crimes against Journalists which is observed worldwide on November, 2, 2019.

The Forum will bring together senior officers from the police and gendarmerie and media stakeholders made up of journalists, editors, media owners, other media experts, journalism training institutions, officials of the media regulatory bodies and press freedom organisations in Guinea to discuss strategies for improving relations between the media and state security agencies  with a view to promoting journalists’ safety.

To further strengthen and guide police-media relations and improved safety of journalists, participants at the forum would also discuss and agree on an outline for the development of a Framework on Police-Media Relations and Safety of Journalists. A consultant would later be engaged to develop a Framework that would spell out the modalities for greater cooperation between the two bodies to foster mutual understanding of the roles of the police and the media in Guinea.

The forum will end with the setting-up of a National Committee on Media Freedom and Safety of Journalists. The committee will be made up of national level Media NGOs, regulatory and auto-regulatory bodies, security forces, government ministries, academia would advocate for the safety of journalists and an end to impunity in Guinea. The Committee would also oversee the implementation of the Framework on Police-Media Relations and Safety of Journalists.

The intervention comes at an opportune time because Guinea is heading into legislative elections in December this year with presidential elections scheduled for late 2020.

Generally, election periods are some of the tense moments when there is increased risk of conflict between the police and political actors on one hand and the media on the other hand as a result of increased interface between them.

It is therefore expected that the Forum will further strengthen police-media relations and improve the safety of journalists in the country, particularly during, before and after the upcoming elections.

The intervention adds to a number of similar ones successfully organised by the MFWA, and other partners in in the run-up to elections in Ghana (2016), Liberia (2017), Sierra Leone (2018) and Mali (2018) and Nigeria (2019) which contributed to improved relations and collaboration between the media and the security agencies.

The intervention in Guinea is being implemented with support from IFEX and OSIWA.