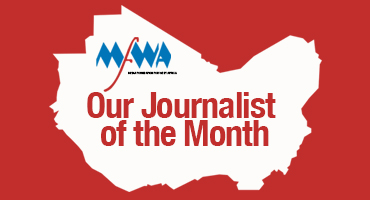 The Media Foundation for West Africa (MFWA) is introducing our JOURNALIST OF THE MONTH SERIES to celebrate journalists who are producing compelling and impactful stories that are impacting society positively.

This series is part of MFWA’s Journalism for Change (J4C) Initiative, which seeks to amplify the considerable contribution of journalists in the society.

“The Journalist of the Month Series is intended to identify, name and celebrate journalists who are doing incredible work that is impacting lives and changing society for the better,” said the Executive Director of MFWA, Sulemana Braimah.

Starting June 2017, the MFWA will be honouring outstanding journalist(s) every month, who will serve as a role model to inspire others to investigate and publish excellent and impactful stories for the benefit of the sub region in particular and the world at large.

A brief profile of the Journalist of the Month would be published on the official website of MFWA (www.mfwa.org) in addition to the publication and circulation of audio-visual material on various social media platforms.

A short audio or video messages would form part of the celebrations in most cases.

The journalists would be nominated by individuals and through independent research by MFWA and its national partners across West Africa. For each month, the nominations would be reviewed by independent experts who will come up with the winner(s)of the month.

Our Journalist(s) of the Month will be journalists working in and for media outlets that are based in West Africa or focus on issues in West Africa.

For more information, please send an email to info[@]mfwa.org.