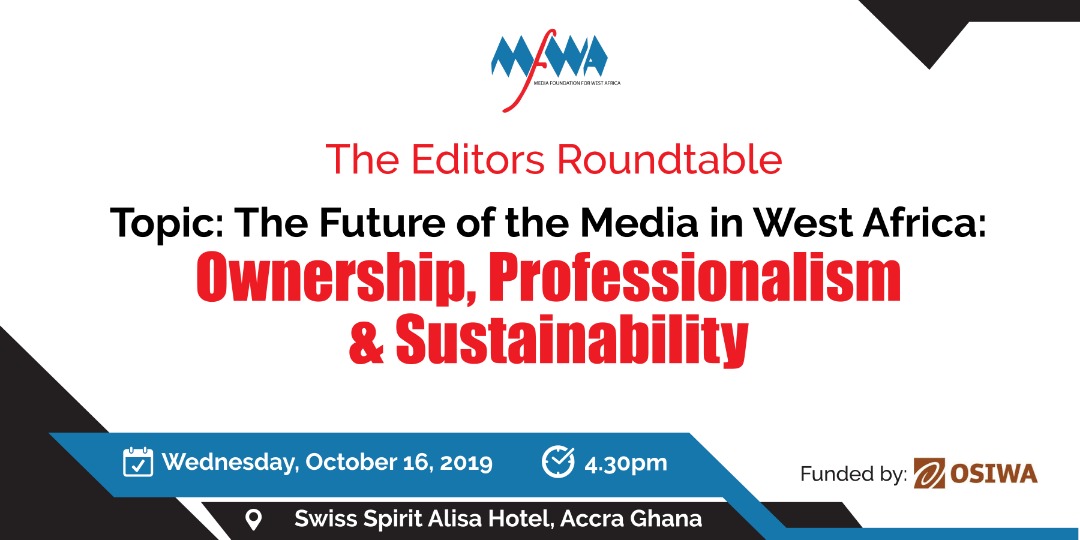 Senior editors, managers and influential media practitioners from across Anglophone West Africa will on Wednesday, October 16, 2019 convene to reflect and deliberate on the future of the media in West Africa.

Dubbed “The Editors Roundtable,” conversations at the event will focus on key issues such as media ownership, professionalism and sustainability.

As watchdogs and agenda-setters, the media have over the years facilitated several critical public discourses on development issues that have yielded notable results. As commendable as these may be, the media is still struggling with diversity in media content, editorial independence and quality in output. Unprofessionalism, partisanship, financial dependence and issues of sustainability have become a continuous struggle. A majority of media outlets are either comatose or on life support. To salvage this, many media organisations resort to commercial activities which largely affect quality and professionalism.

The 2018 Afrobarometer report for instance, reported that the public is gradually losing trust in the media. What is also interesting is the changing media habits, attitudes and perceptions of consumers, which is also dictating market share and calls for more effective techniques in audience engagement.

“The Editors Roundtable” is critical to deliberate on the challenges affecting media sustainability, professionalism and development in West Africa. Key recommendations from this event will be collated and shared with stakeholders to improve the media landscape in the West Africa region. The event is being organised as part of the MFWA’s project on Promoting Free, Quality and Independent media in West Africa being implemented with funding support from the Open Society Initiative for West Africa.