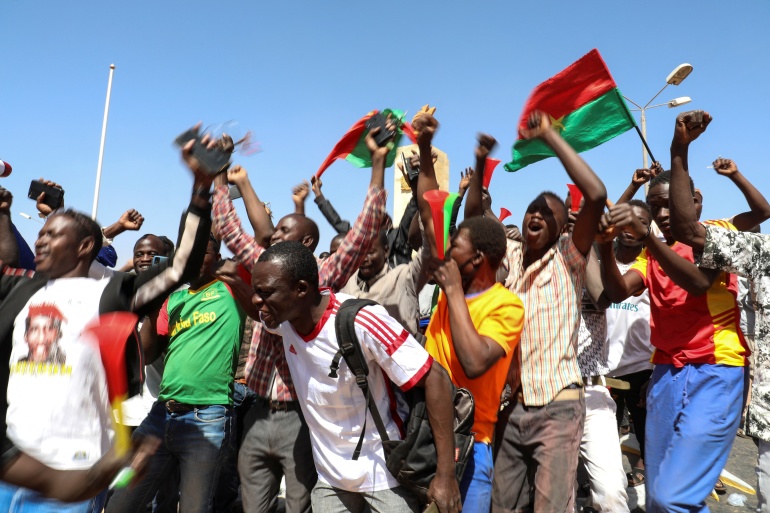 The Media Foundation for West Africa (MFWA) has noted with great concern a number of freedom of expression violations in Burkina Faso in the course of events leading to the January 24, 2022 military coup in the troubled nation, and calls on the new military authorities to uphold all fundamental freedoms including the right to information.

The military took power in Burkina Faso after a weekend of mutiny by aggrieved soldiers, backed by the masses who organised demonstrations against the perceived failure of President Marc Roch Kabore’s government to tackle insurgency that has killed thousands in the Sahel country.

Reading a communiqué signed by Lieutenant-Colonel Paul-Henri Sandaogo Damiba, president of the new junta (Patriotic Movement for Safeguard and Restoration – MPSR), a junior officer, Captain Kader Ouedraogo, announced on national television that the constitution has been suspended, the National Assembly dissolved and the country’s borders closed. A night curfew has also been imposed.

On January 22, 2022, the first of two days of demonstrations, Ibrahim Compaoré, reporter with La Chaîne au Coeur de l’Afrique (LCA), was hit in the left arm by a tear gas projectile thrown by the security forces while filming protests. The journalist who got his left arm fractured due to the choc of the impact was able to receive treatment.

On January 23, 2022, a day before the coup, mobile internet was cut for 35 hours amidst heavy-handed policing against anti-government demonstrations. The authorities had banned demonstrations and the police enforced the ban by using tear gas to disperse protesters, arresting over 30 people.

On the same day, freelance journalist Henry Wilkins and Sam Mednick, who works for the Associated press, were threatened and detained by soldiers at the Sangoule Lamizana military camp in Ouagadougou. The soldiers frightened the journalists by aiming their guns at them. The military officers also confiscated the equipment of the journalists who were briefly detained in the camp. The journalists had their equipment returned after they were released.

Netblocks, a private organization that monitors digital rights, cybersecurity, and internet governance around the world, reported the internet disruption on Twitter.

“The incidents since Sunday morning have been masked by the imposition of a nationwide internet blackout”, it added.

Sawadogo Delwende, a journalist with L’Economiste du Faso, and Noufou Kindo, Editor-in-Chief of Burkina24 have expressed outrage at the internet disruption, describing it as a backward action and a violation of the right to information.

“The events of the last weekend and the coup of Monday were important incidents that created public anxiety. The need for information and the work of journalists become particularly critical during such occasions. It is, therefore, a blatant violation of press freedom and citizens’ rights to information to disrupt the Internet at these times. The pressure is too much,” Noufou Kindo told the MFWA in a telephone interview.

Sawadogo Delwende, expressing her expectations, said “the first thing is that the internet should never again be cut, it should be an absolute freedom… And also, journalists should be protected.”

Media sources reported, meanwhile, that a political activist, Korotoumou Anaïs Drabo (Mouvement Sauvons le Burkina Faso) was arrested by the police on Saturday morning while on her way to a Court in Ouagadougou to which the movement had appealed the ban on protests by the municipal authorities. She was released later on the same day, having been beaten in detention at the Wemtenga police station, according to her narration to the local media.

The demonstrators also perpetrated their part of violent lawlessness. The campaign headquarters of the Mouvement du Peuple pour le Progrès (MPP), which is located in the Nonsin district of Ouagadougou, was vandalised and set on fire on January 23, 2022. Protesters set also fire to tyres in some streets of the capital and other big towns and threw stones in retaliation of police brutalities.

The coup in Burkina Faso confirms a growing fear of democratic a relapse in West Africa following similar military takeovers in Mali and Guinea. The region, once touted as a bastion of democracy in Africa, has seen been racked by political upheavals, especially in the Sahel countries and Northern Nigeria. Constitutional autocracy is on the rise as the traditional two-term presidential mandates have been breached in Guinea, Cote d’Ivoire and Togo.

The MFWA strongly condemns the brutal violations of citizens’ rights to demonstrate, and to access information in Burkina Faso. We welcome the release of some of the arrested individuals during the troubles and call on the military authorities to investigate the violent attacks on protesters as well as the excesses on the part of rioters in order to redress all wrongs.

The MFWA also urges the ECOWAS, the African Union, the United Nations to work together with the military regime and civil society in Burkina Faso to restore constitutional order as soon as possible.