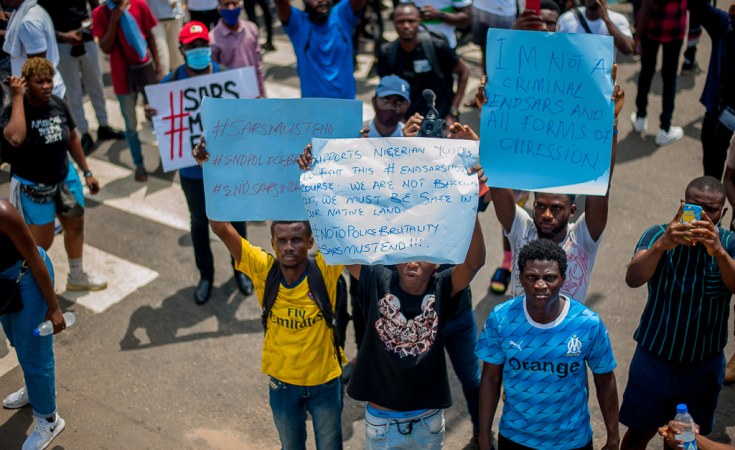 The Media Foundation for West Africa is disturbed by the incidence of harassment of peaceful protesters by the Nigerian security forces and enjoins the authorities to bring to book the police officer who shot a teargas canister at activist Omoyele Sowore.

Omoyele Sowore was on May 31, 2021, injured by a teargas canister allegedly fired by a policewoman while he and others were protesting against widespread insecurity in Nigeria.

The incident happened at Abuja, Nigeria’s capital city, at a rally organised by the Alliance on Surviving COVID-19 and Beyond (ASCAB).

ASCAB is a non-profit group led by human rights lawyer and MFWA board member, Mr Femi Falana – who led the Lagos version of the protest.

In Abuja, MFWA gathered that Sowore and other protesters were approaching the protest venue when the police shut down the place. They had arrived in five-truck loads bristling with weapons.

Locked out of the protest ground, the crowd started singing solidarity songs and began to stream live on social media. But the police scared them away and targeted prominent activist Sowore with tear gas. Footage of the incident streamed on social media showed Sowore standing by the locked gate and a few minutes later falling on the ground after a tear gas canister hit him.  Another footage showed the activist being rushed to a hospital in Abuja, holding his belly in pain. Blood marks were observed on his body.

Thankfully, he was discharged from the hospital on June 1, 2021, a day after the incident. However, he said he was not only hit by a tear gas canister but was also shot by a riot gun. After his discharge, he posted a video clip to his social media accounts narrating the shooting incident.

“From nowhere, a policewoman came and approached me with a riot gun. At a close range, she looked at me and shot me. I started to bleed. I noticed that blood was running underneath my trousers. I couldn’t walk again,” Sowore narrated in a statement afterward.

However, the police have denied shooting at Sowore or harassing any protester.

The spokesperson for the Federal Capital Territory Police Command, Ms Mariam Yusuf, said contrary to the activist’s claims, the police operatives were deployed in the scene only to restore calm.

“The protesters, who went on the rampage were resisted by police operatives in order to prevent them from causing a breakdown of the law and order. There is no record of such an incident as of the time of this release,” Yusuf said in a statement obtained by MFWA.

But expressing anger at the police conduct, a human rights lawyer, Mr Ebun-Olu Adegboruwa, said the police should know that Sowore was only exercising his fundamental rights by joining a rally to demand good governance and an end to insecurity.

“The Constitution of the Federal Republic of Nigeria, in its section 40, allows freedom of assembly, and in section 39, it grants to every citizen the freedom of expression,” he said.