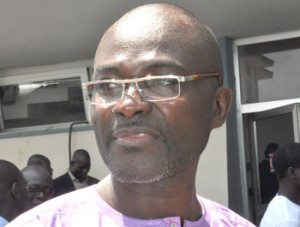 The Media Foundation for West Africa, (MFWA) has learnt with concern the threats issued against Ato Kwamena Dadzie, a journalist with privately-owned Joy FM, by the Member of Parliament for the Assin North Constituency of the Central Region of Ghana, Kennedy Agyapong.

On February 16, 2016, Agyapong reportedly accosted Dadzie in front of the Joy FM station and threatened to “deal with” him for comments the journalist had made about him.

“This morning he menacingly accosted me in front of Joy FM and threatened to slap, beat and “deal” with me if I don’t watch the things I write about him,” the journalist wrote on his Facebook timeline. “He violently shouted all manner of threats and expletives at me as he was restrained and led away by onlookers.”

If the above narrative and other corroborative reports in the media are anything to go by, then Kennedy Agyapong has exposed his utter disregard for the right to freedom of expression.

Resorting to physical confrontation and threatening a journalist is an unacceptable conduct, especially by a lawmaker who should rather appreciate the need to respect journalists and uphold the law.

The MFWA therefore fully approves Dadzie’s decision to file a police complaint against the MP whose conduct in this matter is unworthy of a Member of Parliament.

While we call on the Ghana Police Service to act on the journalist’s complaint with the seriousness it deserves, we also urge the leadership of the Parliament of Ghana to call Kennedy Agyapong to order.