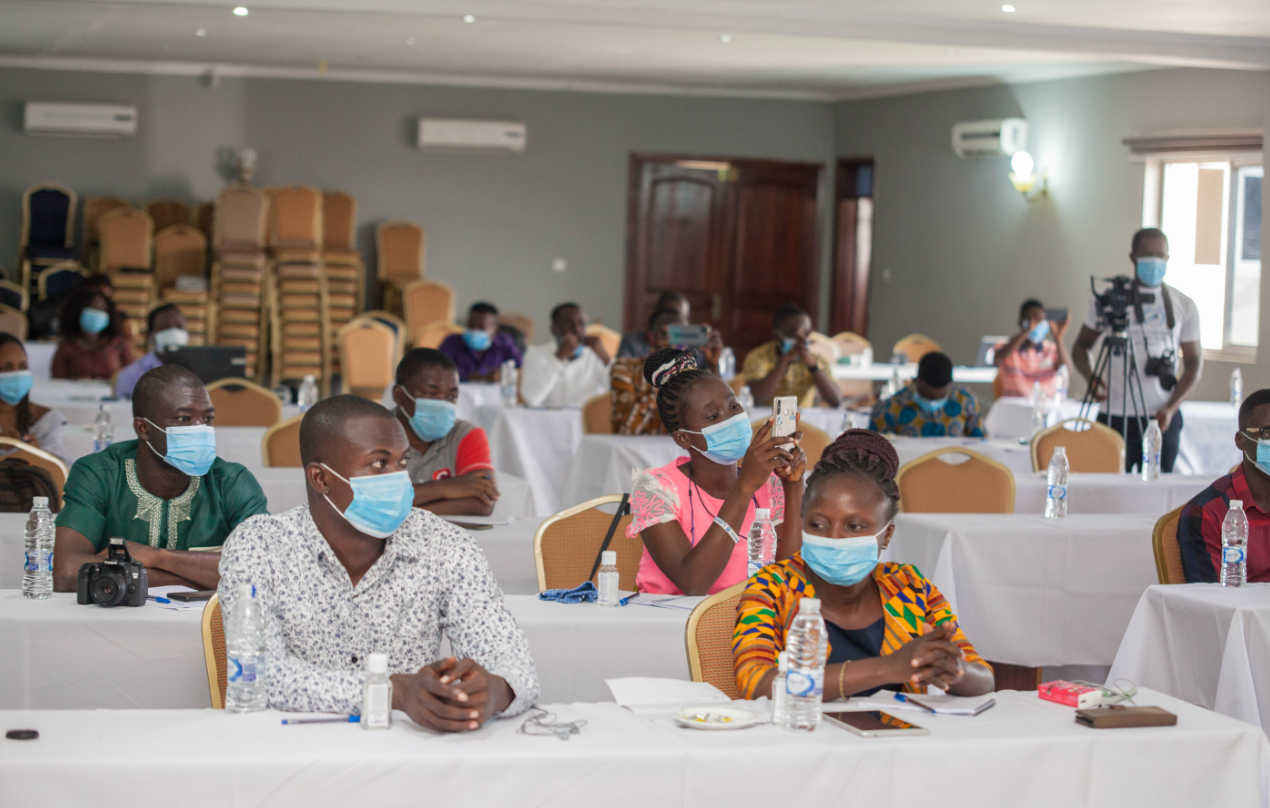 Photo from the training in Kumasi

Free and fair elections are not limited to just casting of ballots. It is also hinged on the information available to voters on the logistical and institutional issues related to the electoral process, and the voters’ information of those seeking to be elected and the plans and programmes they are proposing.

Journalists bear the duty of providing this information to citizens. To be able to do this effectively they must have the right training.

It is for this reason that the Media Foundation for West Africa together with the Centre for Democratic Development (CDD-Ghana) organised a Media Literacy and Election Reporting Workshop for about 150 journalists across Ghana ahead of the country’s general elections on December 7, 2020.

“We do have a lot of work to do and people expect a lot from us, the least we can do is not to disappoint them,” Executive Director for the MFWA Sulemana Braimah said in his opening remarks to journalists at the workshop.

Seasoned resource person including Prof Audrey Gadzekpo from the School of communications, William Nyarko, Executive Director of the Africa Center for International Law and Accountability, Zakaria Musah Tanko lawyer and lecturer at Ghana Institute if Journalism, Este Sikanku Political Communication analyst, and representatives from the Ghana police service and Electoral Commission engaged journalists on how to ensure a peaceful and credible elections.

Participants were engaged on best practices in journalism, reporting on hate and violent language, responsible and public interest reporting, guarding against fake news, safety of journalists during election reporting; and peace promotion through reportage.

They learned that accuracy, right of reply and correction, fairness and balance must be at the centre of the culture of newsrooms if elections are going to be peaceful and trustworthy.

On standards, journalists were reminded to be factual in their reportage and not report hearsays. Mixing facts with opinions, lack of analysis of issues, intemperate language among others hamper standards.

Dr. Audrey Gadzekpo reminded journalists that it is okay to be partisan so far as they can remain factual and uphold ethical standards in their reports.

On safety, the journalists were cautioned by William Nyarko of Africa Centre for International Law and Accountability (ACILA) and the Ghana Police Service to value their lives and safety first when covering elections or any other story.

“No story is worth your safety. This is what I have put at the back of my mind. When I go to events, rallies, elections I have to be extra careful, I have to ensure that my safety first even though I want information.” Said Hafiz Tijani a journalist with Citi Fm.

The tension between journalists and the police which has come about as a result of the assault on journalists by police officers in the past necessitated this session.  Superintendent Sheila Buckman, Director of Police Public Affairs outlined how the security agencies and journalists can work together. She spoke about proper identification of journalists while on duty, building relationships with police officers, joining a professional group such as GJA, and showing interest in police engagement activities as some of the steps journalists can take to ensure a cordial relationship with the police.

The MFWA together with the Ghana Police Service has put together a frame work for Media-Police relations which will be launched on July 1 with the safety of journalists being the focus.

Zakaria Tanko Musa, lecturer at the Ghana Institute of Journalism trained participants on the implications of putting out fake news and hate speech as well as the law governing freedom of expression.

Representatives from the Electoral commission also took journalists through the electoral process, practices and the rules and how journalists can help make the work of the commission easy.

“What this workshop means for me is that, it is going to impact my work positively,” said Patricia Ama Bonsu, a journalist with Ultimate FM in Kumasi. “I have learnt a lot about how to identify and combat fake news because these are things that are going to come up and the onus lies on us as journalists to set the record straight.”

The training forms part of MFWA’s project on Improving Press Freedom and Safety of Journalists Situation in Ghana, Liberia and Sierra Leone being implemented with funding support from the Embassy of the Kingdom of the Netherlands.