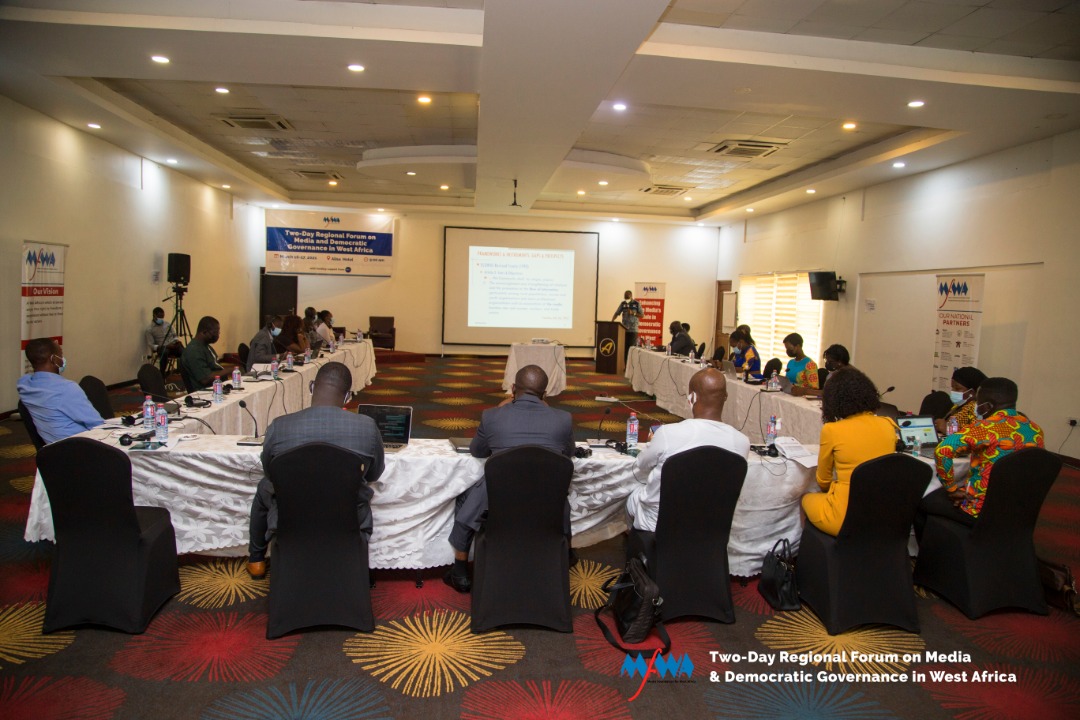 A group of Media and Civil Society Organisations working to promote media development, anti-corruption and democratic governance in West Africa are urging the regional body, ECOWAS, to prioritize issues of press freedom and media development in its agenda, especially in drafting the Vision 2050.

In a communiqué issued after a two-day strategy meeting in Accra, the group commended the ECOWAS Heads of States and Governments for their efforts so far in sustaining democratic governance in West Africa. It, however, bemoaned the shrinking civic space and called for practical, specific, and coherent regional frameworks, policies, and strategies to ensure the protection and security of journalists and other critical voices to promote transparency, accountability and ultimately deepen democratic governance in the region.

The two-day regional forum held on March 16 and 17, 2021 brought together leading media and governance civil society organisations both virtually and in-person. Participants deliberated on regional challenges of press freedom, the shrinking civic space, intimidations, and attacks on journalists and dissenting voices; corruption; access to information, heavy crackdown of social movements; the adoption of repressive cybersecurity laws, and the use of lethal force from state law enforcement officers against citizen.

Kindly read the full communique below:

We, a group of Media and Civil Society Organisations working on press freedom, media development, anti-corruption and democratic governance across West Africa after a two-day regional stakeholders’ strategy meeting in Accra, Ghana,

Commend the ECOWAS Heads of States and Governments for their efforts at sustaining democratic governance in West Africa as demonstrated in the adoption of several protocols and frameworks developed to guide actions by member states and for the purposes of improving the democratic dividends and ensuring the attainment of the ECOWAS Vision.

Observe, however, that, while the region has made progress in promoting democratic governance, several challenges remain unresolved in the face of many emerging issues.  These include the continuous violation of freedom of expression and of the press, the violation of citizens’ right to assemble and protest, challenges in accessing information, and the harsh legislative environment limiting the watchdog role of the media and civil society organisations.

Deeply Concerned about the continuous abuses of democratic rights of citizens, the shrinking civic space, the increasing levels of physical attacks, persecutions and prosecution of journalists, voices of dissent, human rights defenders, anti-corruption crusaders, the use of lethal force by law enforcement officers to crackdown on protesters. Of particular note is how such actions have recently resulted in the killing of over 50 protesters and the arrest of over two hundred demonstrators in Guinea, Nigeria, Senegal, and Mali.

Disturbed by the increased violations of freedom of expression and of the press online with the adoption of repressive cybercrime laws, and digital codes criminalizing online press offenses and imposing extreme penalties including imprisonment and crippling fines on journalists and the media, the growing trend of internet and social media shutdown, especially during elections limiting online activism, and information dissemination.

Urge ECOWAS to incorporate standards that guarantee the civic space in bilateral discussions and negotiations with governments where civic space is under threat and also support the formulation, enactment, and implementation of the right to information law in countries that have not done so and uphold freedom of expression rights as enshrined in their respective constitutions as well as regional and international instruments that guarantee access to information and freedom of expression.

Entreat ECOWAS Heads of States and Governments to comply with the provisions spelt out in the ECOWAS Protocol on Democracy and Good Governance, as well as international frameworks they are signatories to including the Universal Declaration of Human Rights, and the African Charter on Human Rights.

Call on ECOWAS Heads of States and Governments to collaborate to adopt and implement well-defined protocols for the protection of journalists especially those in areas afflicted by insurgency and terrorism and repeal repressive cyber laws that criminalise online press offense.

Commit to engaging, collaborating, and supporting ECOWAS to mainstream issues of press freedom in its democratic governance interventions as well as significantly contributing towards the realisation of the ECOWAS Vision 2050 being developed.

This Communiqué is issued in Accra on March 17, 2021 and signed by the following organisations: