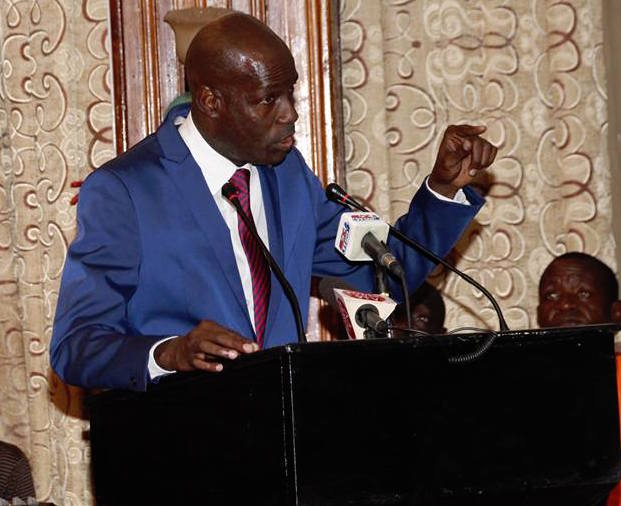 Liberia’s Information Minister has molested a female journalist during a press conference in the capital Monrovia, on January 23, 2017.

Reports say the Minister, Eugene Nagbe, flared up when Estelle Liberty Kemo from Power TV asked about a recent row between him and an opposition Member of Parliament, Moses Kollie.

Reports say in response to the reporter, Minister Nagbe repeatedly yelled at her to “go and ask her boyfriend, Representative Moses Kollie.”

The incident, which occurred during the President’s State of the Nation address in the Capitol Building in Monrovia, has drawn protests from media groups and the public in Liberia.

On January 24, the director of Power TV and veteran journalist Aaron Kollie, filed a complaint backed by a video of the incident with the Liberian Press Union which has taken up the matter.

Also, the Secretary General of the Female Journalists Association of Liberia (FeJAL), Antoinette Sendolo said in a statement: “We out-rightly denounce the irresponsible and unruly attitude of Mr. Nagbe and demand a prompt public apology to Madam Kemoh and the Female Journalists Association of Liberia because his comments have caused Madam Kemoh marital and professional embarrassment and has brought her to public ridicule.”

The Reporters Association of Liberia on their part says the attack was “unjustified and provocative.” In a press statement, the Association noted that accusing “Reporter Kemo who is a married woman, of having another man as a boyfriend without any proves, was unwarranted.”

The MFWA also finds it regrettable that a Minister of state could attempt to embarrass a journalist in public. It is offensive for the minister to allege without proof that the Power TV reporter is a girlfriend of his political rival. Mr. Nagbe’s behavior also amounts to chauvinism, and is unbecoming of a Minister of state. We therefore call on President Ellen Johnson Sirleaf to cause the matter to be investigated and to sanction the minister for a conduct that clearly reflects negatively on her government.