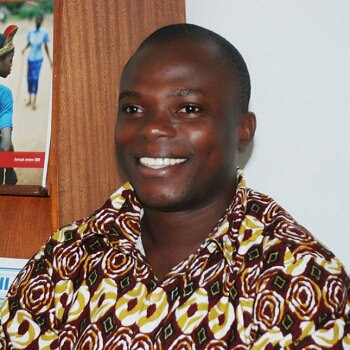 The Board of Directors of the Media Foundation for West Africa (MFWA) has elected a new Chairman of the Board and appointed a new Executive Director for the organisation. The decisions were made at the Board’s two-day meeting in Accra, held on January 8 and 9, 2014.

At the board level, Mr. Edetaen Ojo from Nigeria has been elected as the new Chairman. He replaces Ms. Soyata Maiga from Mali, whose tenure as board Chair has come to an end. Mr. Ojo, who is the Executive Director of the Nigeria-based Media Rights Agenda (MRA), is one of Africa’s leading experts on free expression, media development and access to information.

Mr. Ojo is a board member of a number of local, regional and international human rights and media development organisations including the Uganda-based African Freedom of Information Centre (AFIC) and the International Media Support (IMS) based in Copenhagen, Denmark. Until June 2013, he was the Convenor (Chair) of the governing council of the Canada-based organisation, IFEX, the world’s biggest network of free expression advocacy organisation.

Mr. Braimah has tremendous experience in free expression and media development issues and has participated in and presented papers at several international conferences on free expression and media development. In the last two years, Mr. Braimah has served as a reviewer of the World Press Freedom Index, an annual ranking of countries on press freedom, conducted by the US-based organisation, Freedom House. He currently serves on the Governing Council and the Executive Committee of IFEX.

Mr. Braimah joined the MFWA in 2010 and until his appointment, was the Deputy Executive Director of the organisation. Prior to joining the MFWA, he worked as news editor of The Chronicle Newspaper in Ghana, and part-time lecturer at the Africa University Colleague of Communications

The board highly commended Prof. Kwame Karikari for his exemplary leadership of the MFWA for the past 16 years. It also commended the organisation for its tremendous efforts in promoting free expression in West Africa, particularly its work on safety of journalists and media development in Mali and Cote d’Ivoire during the political crisis and in the ongoing democratic recovery processes in those countries.

The board issued a resolution at the end of its meeting in which it expressed concern about the falling standards of professionalism in media practice in the West Africa region. The Board also expressed deep concern about the serious challenges posed by extremism, terrorism and drug trafficking to media freedom and practice in West Africa and called on national governments, regional bodies and civil society groups in West Africa to work collaboratively to address the problem,” the resolution stated.

Below is the full resolution adopted by the Board:

By the Board of Directors of Media Foundation for West Africa (MFWA)
At its Meeting held in Accra, Ghana, on January 8 & 9, 2014.

On January 8 and 9, 2014, the Board of Directors of the Media Foundation for West Africa (MFWA) met in Accra, Ghana, to discuss and review a number of strategic issues relating to the operations of the organisation as well as the broader issues of media freedom, freedom of expression and media development in the West African sub-region.

The meeting was presided over by the Vice Chairman of the Board, Mr. Edetaen Ojo, who is also the Executive Director of the Nigeria-based Media Rights Agenda. At the end of the two-day meeting, the Board unanimously adopted and issued this resolution.

1. The Board welcomes the adoption by the United Nations General Assembly in December 2013 of a Resolution on the Safety of Journalists and the issue of Impunity, and for proclaiming November 2, as International Day to End Impunity for crimes against journalists. The Board commends the Governments of Nigeria, Ghana and Mali for co-sponsoring the resolution along with other countries and urges the three countries to spearhead efforts to ensure the implementation of the resolution within the West Africa region, in Africa and internationally.

2. In the spirit of the UN Resolution referenced above, and the principles of the ECOWAS Protocol on Good Governance and Democracy, the Board urges ECOWAS leaders and relevant organs of ECOWAS to ensure the enforcement of the decisions of the ECOWAS Community Court of Justice in order to discourage acts of impunity within the region.

3. The Board further calls on the ECOWAS Commission to speed up the processes for the adoption of uniform regional legal frameworks on the right to freedom of expression and the right to information.

4. The Board recognises and highlights the importance of internet penetration, affordability and access, for the overall development of the region. Accordingly, the Board calls on national governments and regional bodies in West Africa to prioritise investment in ICTs and work collaboratively to promote internet freedom in the region.

5. Further to the above, the Board also welcomes the adoption by the UN General Assembly in December 2013 of a Resolution on “Right to Privacy in the Digital Age” wherein the General Assembly called on States “to review their procedures, practices and legislation regarding the surveillance of communications, their interception and the collection of personal data, including mass surveillance, interception and collection, with a view to upholding the right to privacy by ensuring the full and effective implementation of all their obligations under international human rights law.” The Board called on West African nations to give full effect to the Resolution.

6. The Board remains extremely concerned about the serious challenges posed by extremism, terrorism and drug trafficking to media freedom and practice in West Africa and calls on national governments and regional bodies in West Africa to work collaboratively to address the problem. The Board, on behalf of the MFWA, pledges its support for such efforts through collaborative activities, partnerships and other forms of interventions as may be required to effectively respond to these problems.

7. In the face of the numerous challenges to free expression in the region, the Board commends the Secretariat of the MFWA for its tremendous efforts in promoting free expression in West Africa, particularly its work on safety of journalists and media development in Mali and Cote d’Ivoire during the political crisis and in the ongoing democratic recovery processes in those countries.

8. The Board reiterates its deep concern about the falling standards of professionalism in media practice in many parts of the region and calls on media professional bodies and associations as well as the media community in the region as a whole, to develop and implement effective self-regulatory mechanisms to improve professional standards.

11. The Board hereby approves the work plan of the organisation for 2014.

The MFWA is a regional independent, non-profit, non-governmental organization based in Accra. It was founded in 1997 to defend and promote the rights and freedom of the media and of expression.