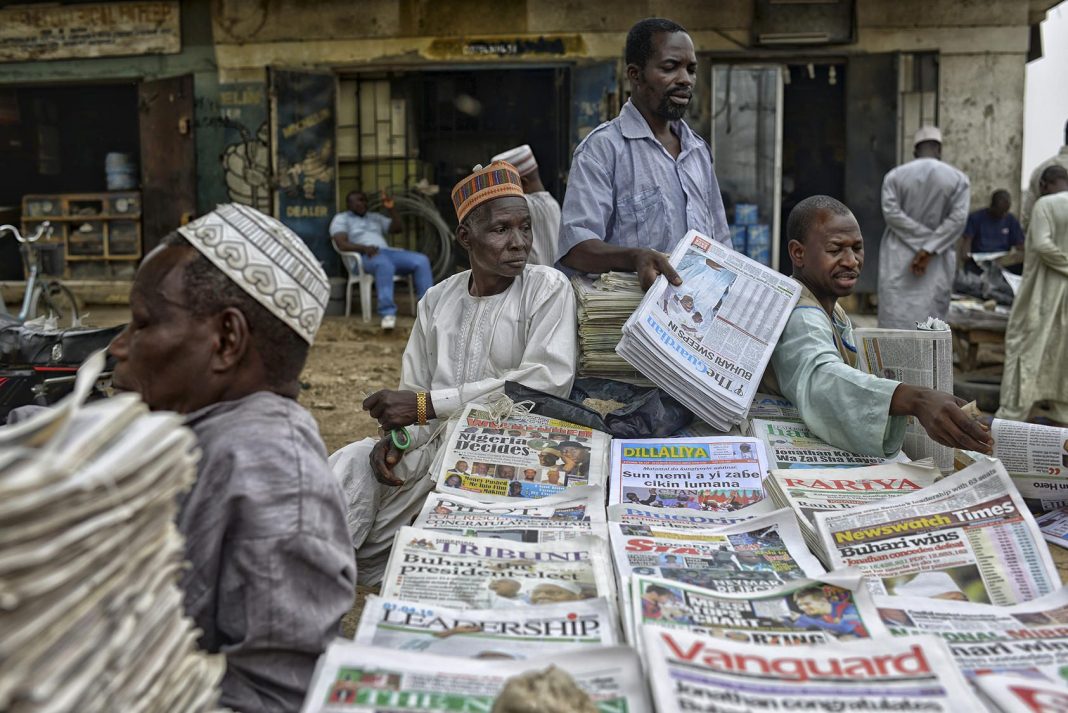 Operatives of the Intelligence Response Team (IRT) of the Nigeria Police Force on May 10, 2021, swooped on newspaper vendors in Owerri, the capital city of Imo State in southeastern Nigeria, and confiscated newspapers.

The police also arrested six of the newspaper vendors at Number 5 Rotibi Street, Douglas Road, Owerri for selling newspapers containing articles on the Indigenous People of Biafra (IPOB), a secessionist group in Nigeria.

Five of the six vendors arrested by the IRT team were identified as Nnamso Okoro, Nelson Enyiama, Blessing Isinwa, Onyebuchi Iwundu, and one Michael.

MFWA was informed that the gun-wielding police operatives accused the newspaper vendors of circulating newspaper publications that were considered “anti-government.”

“The police operatives came to our distribution point and arrested six of our members because they were selling papers carrying stories on the proscribed IPOB,” Chidiebere Tasie, the chairman of the newspaper vendors’ association in Imo State, told MFWA.

“They also confiscated all the newspapers being sold at that time. I was told they asked of me, but I was not around,” Tasie told our correspondent in Nigeria.

Tasie said after his colleagues’ arrest, he reached out to the state’s police commissioner, information commissioner, and the director of Nigeria’s secret police, all of whom denied any involvement in the arrest.

“I was shocked because I didn’t know a police squad could come to a state without the knowledge of any of the three individuals. So we held a press conference on our missing colleagues,” he said.

The following day, four of the six vendors were released from the state police headquarters. The other two were released after a protest march by the vendors’ association.

“We spend over N300,000 (US$730) to treat our members after their release because they were mercilessly beaten. We demand a full investigation into this matter and compensation for the victims because they denied them the right to earn their daily income.”

A week before the arrest of the vendors, security agents had arrested the circulation manager of the New Telegraph Newspaper, Chuks Ugwuibe, while he was taking his weekly returns from vendors. He was taken to an undisclosed security facility.

Meanwhile, when MFWA contacted the leader of the police’s Intelligence Response Team, Abba Kyari, he referred our correspondent to the police commissioner in Imo State, Abutu Yaro.

Yaro, in his response to MFWA’s enquiries, said, “Facts available confirmed that the vendors had other illicit vocations which attracted the IRT tracking platform to pick them up.”

When asked to expatiate on the claim, Yaro declined to speak further.

“Don’t bother yourself,” he said.

Meanwhile, the Nigeria Union of Journalists in Imo State has denounced the vendors’ arrest and detention, describing the acts as an assault on press freedom and access to information as enshrined in the Nigerian constitution.

“This latest onslaught on the pen profession and its ancillary arms seems to be a very loud confirmation of the much-talked-about fast drift of the nation away from democracy to tyranny, chaos, and oppression,” Precious Nwadike, the NUJ chairman in Imo State, said.

“We suppose we are still under a democratic dispensation and our profession is protected by Section 22 of the 1999 Constitution and other extant laws of the land. The media remains a bastion of democracy and should for no reason be gagged.”

The MFWA also demands that the Nigerian security agencies respect the freedom of the press, the citizens’ rights to access to information, and the rights of the vendors to engage in meaningful means of livelihood as provided in Nigeria’s 1999 Constitution (as amended).

The Indigenous People of Biafra (IPOB) is a Biafra separatist organisation founded in 2012 by British-Nigerian Nnamdi Kanu whose aim is to seek the separation of the Igbo ethnic group from Nigeria.

Supporters of the secessionist group have always accused the Nigerian government of poor investment in their region, inequitable resource distribution, and exclusion of the Igbo people from top government positions.

However, in September 2017, a federal court in Nigeria’s capital city Abuja designated IPOB as a terrorist organisation under Nigeria’s Terrorism Act.

The IPOB fought its proscription in the court by seeking the court’s reversal of its decision in 2018, but all attempts to seek redress in court have been futile.

On May 18, 2021, Nigeria’s acting police chief, Usman Baba, reportedly ordered police officers to ignore the rules of engagement and clamp down on IPOB supporters.