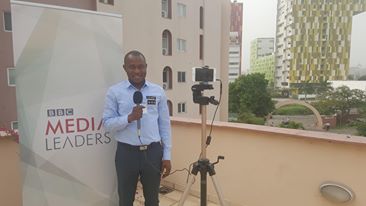 The Media Foundation for West Africa (MFWA) strongly condemns the wanton attack on Yussif Abdul Ganiyu, General Manager of Kumasi-based Zuria FM over his station’s reports about brutal military enforcement of the C0VID-19 lock down in Ghana’s second biggest city.

Abdul Ganiyu was attacked on April 5, 2020 by a soldier while he was covering a clean-up exercise at the Kumasi suburb of Aboabo-Akorem as part of efforts to fight the spread of the COVID-19 pandemic. While the journalist was conducting an interview, a member of the military patrol team enforcing a COVID-19 lockdown identified him as the General Manager of Zuria FM and confronted him over a report the station had published on its Facebook page on alleged brutalities against a 71-year-old man who had allegedly flouted the lockdown order.

The journalist told the MFWA that the female soldier, Second Lieutenant Betrot Ampoma, who he understands to be the commander of the patrol team at Asokore Mampong Municipality, slapped him several times after bundling him into the patrol vehicle. He said Lt Ampoma had called anonymously two days earlier to threaten him.

“She told me she was the one who had called to warn me and my station to desist from discrediting the military,” Ganiyu said.

The journalist, who is also a local correspondent for Deutsche Welle (DW) Radio, said he was released by the soldier after the intervention of the Asokore Mampong Municipal Chief Executive, Honourable Alhaji Alidu Seidu, who was leading the clean-up exercise he was covering. His seized phone was, however, not returned to him.

Meanwhile, the management of DW has, in a letter addressed to Ghana’s Minister of Information, requested that the matter be investigated and the culprit punished.

“I am kindly seeking your valued assistance in having this mater investigated and making the responsible persons accountable” read the letter signed by the Head of Corporate Communication of the German broadcaster, Christoph Jumpelt.

The MFWA also condemns the attack on Abdul Ganiyu as unwarranted and dissuasive of the media’s impressive support for the national effort to combat the COVID-19 pandemic. This incident adds to a growing number of brutal attacks on civilians by the security agencies enforcing the COVID-19 lockdown across Ghana, a phenomenon that the leadership of the military and police must be concerned about and take urgent steps to ensure officers conduct their operations within the confines of the law.

The media are constitutionally mandated to cover and report on national matters generally and to educate and inform the public about issues affecting their welfare of which the COVID-19 pandemic is one. The operations of the security agencies and the conduct of their officers is a legitimate matter of public concern and media scrutiny. State security agencies must therefore recognise this reality and not see the media as an enemy. To this end, we call on the military to probe the attack on Ganiyu and to ensure accountability.