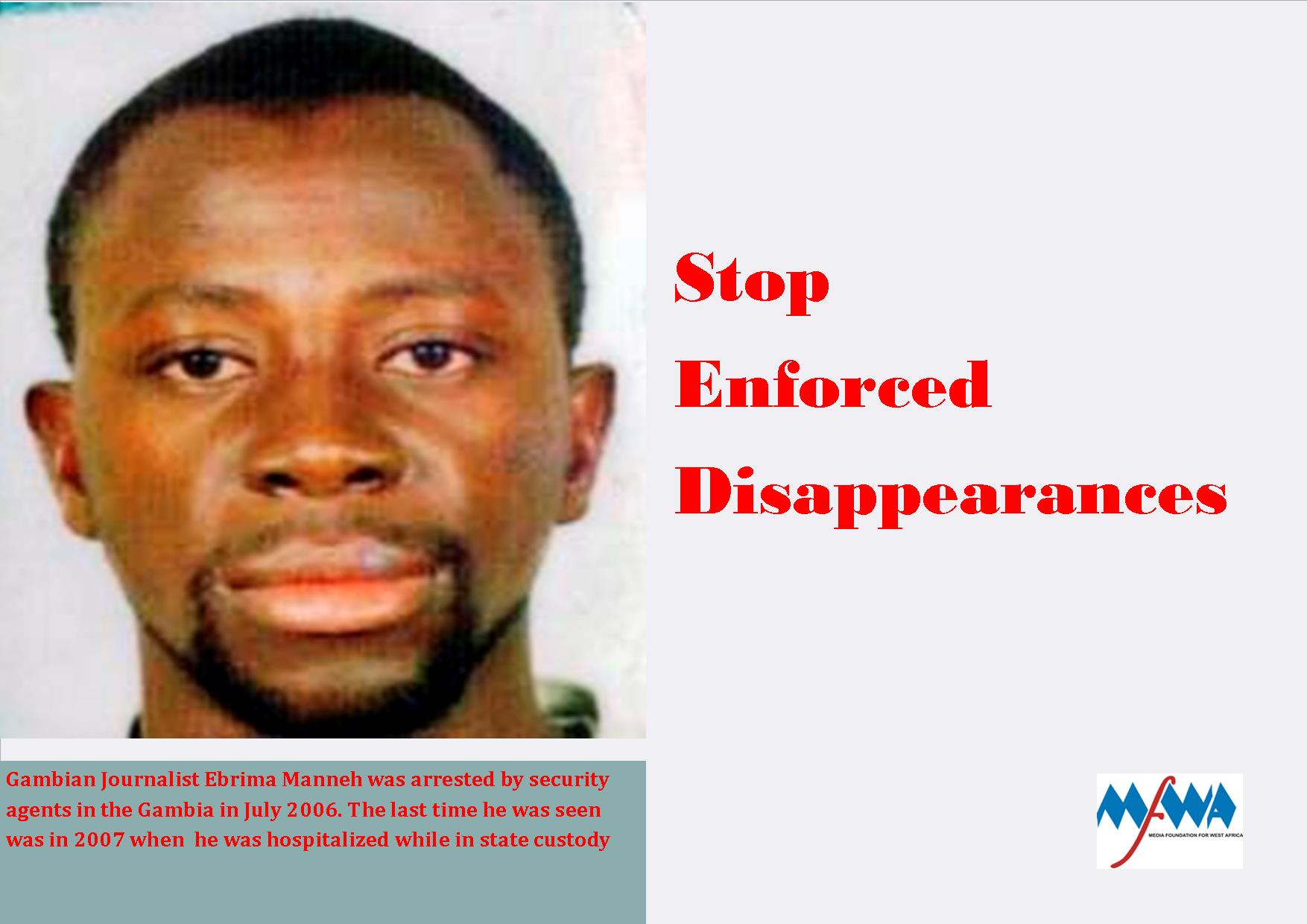 Manneh, a journalist with the then-pro-government Daily Observer newspaper, was arrested on July 7, 2006 by officers from The Gambia’s National Intelligence Agency (NIA) at his office in Banjul.

Manneh was arrested both for passing “damaging” information to a BBC journalist during an African Union meeting in Addis Ababa and for trying to republish a BBC story criticising President Yahya Jammeh’s coup to power. During the year following his arrest, Manneh was spotted multiple times within various prisons and detention centres, as he was transferred many times. He was also seen with paramilitary officers at a hospital after being reportedly treated for blood pressure.

To date, the government has denied having arrested and taken Manneh into custody and the journalist is yet to be found.

The United Nations has emphasised that “enforced disappearance has frequently been used as a strategy to spread terror within the society. The feeling of insecurity generated by this practice is not limited to the close relatives of the disappeared, but also affects their communities and society as a whole.” Indeed after Manneh’s disappearance, many journalists in The Gambia increasingly feared for their lives.

In 2007, the MFWA filed a civil suit at the ECOWAS Community Court of Justice to seek justice for Manneh and his family. Not only did the government of The Gambia fail to make an appearance in Court but it also tried to kidnap one of the witnesses against the state. On March 10, 2008, Yahya Dampha, a Gambian journalist who was a witness in the Manneh case and who had been persecuted into fleeing to neighbouring Senegal, escaped a kidnapping attempt by three suspected NIA agents. At that time, Dampha told the MFWA that he sought the help of his neighbours upon recognition of one Habib Drammeh, a known NIA operative attached to former Gambian President Yahya Jammeh’s office. Upon his neighbours’ intervention, the would-be abductors fled. Dampha also told the MFWA that prior to the attempt, he had received a number of threatening phone calls.

A few months later on June 5, 2008, the ECOWAS Court found The Gambia guilty of disappearing Manneh and ordered the government to release the journalist, and pay him US$100,000 in damages.

Nine years on, Manneh’s whereabouts remain unknown and the Gambian government has failed to pay any compensation, in violation of its obligations under the Revised ECOWAS Treaty. The MFWA continues to appeal to ECOWAS to ensure that The Gambia complies with the ruling of the ECOWAS Court in accordance with its obligations as a member of ECOWAS. We also call on ECOWAS and all states in West Africa to prioritize the issue of safety of journalists, by investigating, prosecuting and remedying cases of enforced disappearance. Finally, we urge all states in West Africa to respect, protect and fulfil people’s rights to freedom of expression, including press freedom, and to cease persecuting individuals for exercising this right.