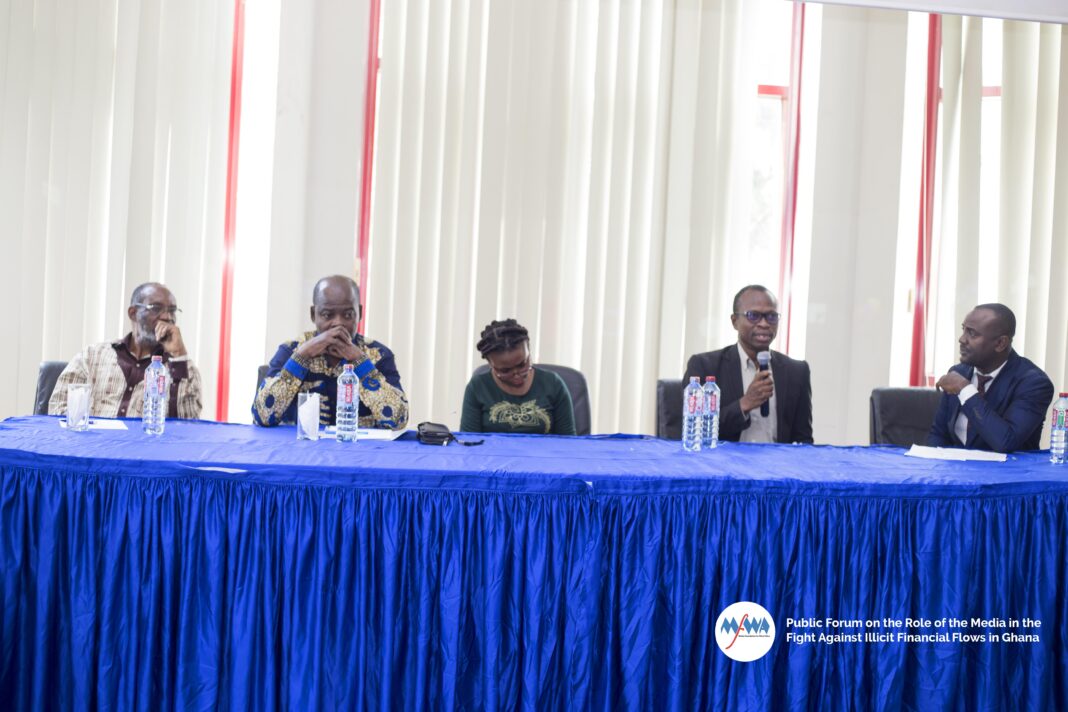 A public forum on the role of the media in the fight against illicit financial flows in Ghana, on Thursday, December 15th, 2022, concluded with experts saying it will take nothing less than extra smart journalism to truly fight that variety of financial crime.

This is because illicit financial flows are white-collar in nature and perpetrated by crooks who operate with utmost sophistry that even state agencies have hard time having a handle on.

These same sophisticated crooks have the financial means to make life miserable for journalists who try to expose them. Thanks to the proceeds from their crimes, they can sue for fun, pay to hide information or worst, hire assassins to silence journalists.

Due to these risks, journalists who want to report on illicit financial flows must be extra smart.

The forum which was held at the Ghana, India Kofi Annan International ICT Center in Accra was on the theme: The role of the media in the fight against illicit financial flows, and was co-hosted by the Media Foundation for West Africa (MFWA) and the Economic and Organized Crimes Office (EOCO).

It brought together experts in finance, State actors, CSOs and journalists from across the Ghanaian media landscape. Nana Akwasi Awuah, Managing Director of the Precious Minerals Marketing Company, was chairman of the forum.

According to him, the forum was a very good initiative because it brought into focus IIFs and the insufficient coverage of this in the Ghanaian media.

He called on government to help promote media interest in IFFs reporting since the crime bleeds the country’s economy so much and exposing perpetrators of such crimes will ultimately help the country avoid revenue leakage.

As part of the forum, a panel was convened to discuss the role that the media can play to help fight against illicit financial flows and proffer strategies for effective reporting on that variety of crime.

It was out of that panel discussion that it became clear that the sophistry involved in illicit financial flows requires genius journalism to expose it.

Illicit financial flows (IFFs) are illegal movements of money or capital from one country to another resulting in funds being illegally earned, transferred, and/or utilized across an international border.

Examples of IFFs include a drug cartel using trade-based money laundering techniques to mix legal money from the sale of used cars with illegal money from drug sales; an importer using trade mis-invoicing to evade customs duties, value-added tax, or income taxes; and a corrupt public official using an anonymous shell company to transfer dirty money to a bank account.

The Organisation for Economic Co-operation and Development (OECD) estimates that about USD1 trillion is lost to the global economy every year due to IFFs. In Africa, the loss is over USD 89 billion every year according to the United Nations Conference on Trade and Development (UNCTAD).

IFFs have been identified as such a bleed on the global economy and the economy of nations that Target 16.4.1 of the Sustainable Development Goals enjoins countries to drastically reduce it by 2030.

According to a 2015 report by the Global Financial Integrity, Ghana lost some USD $ 40 Billion between 1960 and 2012 through trade-based IFFs. Ghana is also estimated to lose USD 3 billion through IFFs every year. Transaction-level data from the Ghana Customs Authority indicate abnormally undervalued exports of gold and cocoa from Ghana equalled USD 8.8 billion in constant prices (base year 2011) or USD 4.1 billion in current prices between 2011-2017.

Consequently, the country has suffered corporate tax base erosion of USD2.2 billion in constant price (base year 2011).

Among the experts who attended the forum was Mr. Abdulai Bashiru Dapilah, Head of Organized Crime and member of the illicit financial inflows unit of the Ministry of Finance, who also gave the keynote address. He cited recent estimates by the Economic Commission for Africa which put the average annual trade based on IFFs from Ghana at USD $ 1.15 Billion between 2000 and 2016.

“For the 17 years period Ghana lost about USD $ 19.5 billion due to trade mis- invoicing,” he noted.

Also, he said, audit conducted into Ghana’s Custom Management System in 2019 revealed USD $ 1.8 billion was transferred outside the country for which no goods came into the country.

Interestingly while IFFs crimes are prevalent in Ghana and resulting in the country losing millions of dollars, the sector has engaged the interest of very few journalists. It was to whip up media interest in the subject and also empower the few journalists already reporting on issues in the area that the public forum by the MFWA and EOCO convened the panel discussion.

Panelists were emphatic that IFFs crimes are often perpetrated by very sophisticated, well-educated and well-connected criminals. And because of the huge wealth that their criminal activities bring them, they often have the financial muscle to buy corrupt state and government officials and compromise law enforcement agencies with bribes.

The power of their influence on government and law enforcement officials means these criminals often are able to harass and even murder journalists who dare try to expose them for the crooks that they are.

“Doing journalism to expose illicit financial flows, therefore, requires that the journalist commits to doing more than doing the normal everyday reports that is staple for the media. We must be prepared to do more work than that,” said Emmanuel Dogbevi whose credentials include working on the infamous Panama Papers.

He adds, “investigative journalists who want to report on IFFs must also be smarter than average; you have to be a genius in your own right.”

A smart journalist who can be successful at IFFs reporting must know his facts, know his peers, identify funding opportunities and must be public interest-focused rather than commercial in their occupational outlook. To be this kind of package, Emmanuel Dogbevi recommends that such journalists must yield themselves to training. He points out that it helps if training in this area is specialized and constantly updated with refresher courses.

Mr. Dogbevi explains that this is critical because the sophistry used in perpetrating IFFs crimes is constantly changing, especially with the improvement in technology.

It is also smart, he said, to network with other investigative journalists both locally and abroad, especially, but not limited to those with a shared interest in reporting on IFFs. In this regard, membership with the International Committee on Investigative Journalist (ICIJ) is good.

In response to the concern that accessing information for investigative stories on IFFs is hard, Angela Azumah Alu of the University of Ghana Business School said there are a number of publicly available data that can be accessed for stories or for use in crosschecking claims put out by the government for instance. She cited online databases of the Global Financial Integrity (GFI), the UN Comtrade Database and data from UNCTAD.

On his part, Bishop Akologo said academia can be of immense help to journalists if expert academics are consulted for explanation of information and data that journalists do not understand.

Also, he said journalism schools can come up with specialized courses that focus on specific forms of investigative journalism, including reporting on IFFs.

For journalists whose investigative pieces are not published by their media houses due to economic or other interests, he said in Ghana, the Center of Public Interest Law, an affiliate of the Integrated Social Development Center (ISODEC) can be contacted for assistance to publish.