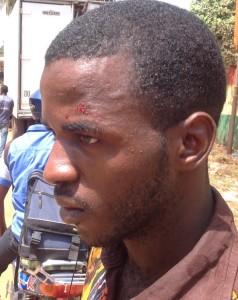 The MFWA’s correspondent in Guinea reported the incident happened while Sow was covering a march organised by Guinean civil society activists to protest the perceived state of insecurity in the country.

“I was covering the ceremony when gendarmes came to tell me to stop filming,” Sow told our correspondent. “I showed them my press card and told them that I was only doing my work. It was at this point that one of them slapped me. The other one sent me to the floor.”

The journalist sustained injuries on his face as a result of the attack.

After Commander of the National Gendarmerie Mamadou Baldé was informed of the incident by the guineematin.com editorial office, he promised to punish the two gendarmes formally identified by the journalist.

Nouhou Baldé, founder of guineematin.com said the news site will formally lodge a complaint regarding this instance of gendarme brutality.

Acts of violence perpetrated against journalists by gendarmes have become a frequent occurrence in Guinea. However, the state has failed to hold many of these perpetrators accountable, which has the potential to promote a culture of impunity and undermine press freedom in Guinea. The MFWA urges the Guinean government to initiate investigations into all attacks on journalists and freedom of expression. It also calls on the National Gendarmerie to live up to its promises and internally sanction the two gendarmes. In addition, the MFWA encourages the National Gendarmerie to implement programmes in order to sensitise gendarmes on respecting and protecting journalists and press freedom.