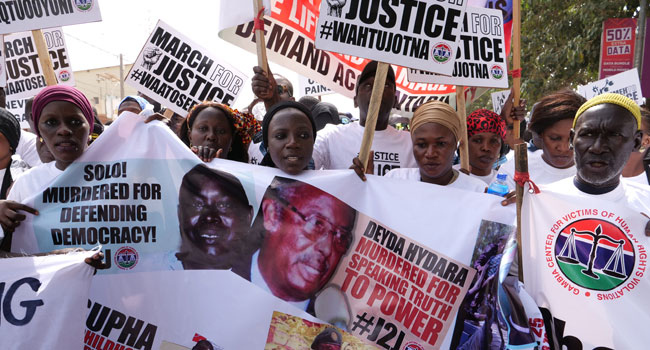 The Media Foundation for West Africa (MFWA) condemns the recent crackdown in The Gambia and calls on the Gambian government to cease the attacks  on anti-government protesters, release journalists and protesters who have been arrested and allow the two radio stations that have been shut down to resume broadcasting.

The police on January 26, 2020, brutalised and arrested 137 anti-government demonstrators demanding the resignation of President Adama Barrow in line with his campaign promise to limit his mandate to three years. The demonstration that started peacefully became violent when protesters and police clashed leading to injuries. Some police officers and protesters also physically attacked journalists who were covering the protests. One of the journalists attacked was identified as Sankulleh Janko, a reporter for Dakar-based West Africa Democracy Radio (WADR. He was beaten with sticks and his equipment and phone seized.

After arresting the protesters, about a dozen police officers stormed the premises of Home Digital FM and ordered the managers to stop broadcasting. They also arrested the proprietor and owner of the station, Pa Modou Bojang.

A similar number of police officers invaded King FM and ordered all staff to evacuate the premises, before shutting down the station. The security officers also arrested two of the station’s manager’s Gibbi Jallow and Ebrima Jallow. The authorities accused the two stations of making themselves platforms for inciting violence and threatening the security of The Gambia.

While Home Digital FM was indeed covering the demonstrations and subsequent crackdown, the Management of King FM has denied having covered the events, a denial corroborated by several sources.

The authorities also revoked the accreditation of Al Jazeera reporter, Nicolas Hague, after accusing him of being biased towards the opposition.

The government later announced a ban on the “3 Years Jotna (is up) Movement”, the group that has spearheaded weeks of protests calling for Barrow to step down.

Although The Gambia’s Constitution stipulates a five-year presidential term, the political coalition that backed Adama Barrow in the 2016 elections had promised to limit its term to three years during which it would lay the foundations for a durable democracy.

The government appears to have failed not only to keep its three-year transitional government promise, but also to deliver on the legal and constitutional reforms to establish a credible democratic culture after the 22 years of Yahya Jammeh dictatorship.  The MFWA finds the crackdown on protesters, arrests of journalists, shutdown of the radio stations and subsequent ban of the pressure group by the government as very troubling.

The MFWA is even more alarmed at the government’s statement that “any person, radio station, business or group that chooses to do business with Operation 3-Years Jotna and or promote their agenda will be in violation of this pronouncement and will face severe consequences.” We wish to remind the government that the media have a constitutional mandate to inform the public on certain issues particularly issues of public interest, and so the government cannot ban them from carrying out this duty. It is therefore unlawful for the government to threaten that the media or any group that shares information about the pressure group will face severe consequences.

The MFWA  is therefore calling on The Gambian authorities to release all the detained demonstrators and journalists as well as allow the radio stations that have been shut down to resume broadcasting. The government should refrain from any acts of censorship of the media and recognise the important role the Gambian media play in the consolidation of democracy in the country. We further urge the government to respect the citizens’ right to peaceful assembly as guaranteed by Section 25(d) of the Gambian 1997 Constitution.

We further  entreat Gambians particularly members of the “3 Years Jotna Movement” to exercise their freedom of assembly rights peacefully and within the laws of The Gambia.

The MFWA also urges the state security agents and state officials to put a stop to attacks, arrests and intimidation of people, activists, pressure groups etc for the exercising their freedom of expression rights both offline and online.