While newspaper and official reports claim Ceesay has escaped from the hospital, many believe he has been killed.

“Prison authorities claim he escaped but that’s illogical as he is being watched 24 hours. The family also confirm that they are not in contact with him,” a source said.

Ceesay, who has been in detention for over nine months was first arrested on July 2, 2015, briefly released and re-arrested. After a two-week detention in which Ceesay was held incommunicado with no access to a lawyer or his family, he was brought before a Magistrates Court on August 4, 2015 and charged with a single count of sedition. The prosecution accused him of distributing photos of Gambian President Yahya Jammeh with a gun pointed at him. On November 18, 2015, while the case was still ongoing at the Magistrates Court, the state pressed a fresh seven-count charge against the journalist. The case before the Magistrates Court was later withdrawn. 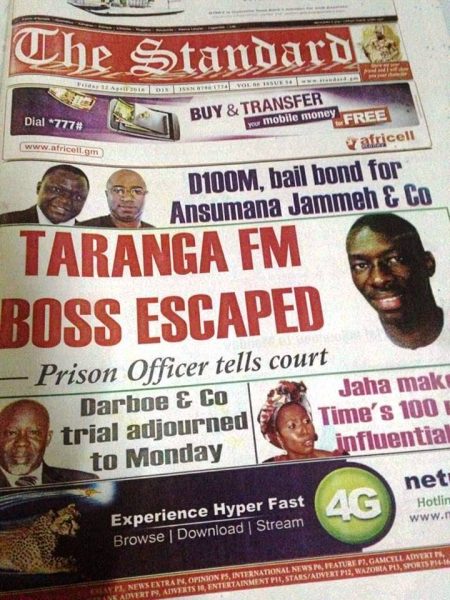 His reported disappearance comes barely a week after opposition figure, Solo Sandeng died in custody for leading a pro-democracy protest on April 14, 2016 in Banjul. Sandeng together with more than 20 others were reportedly arrested by paramilitary personnel and taken to the infamous Mile II Prison. They were reportedly transferred to the headquarters of the notorious National Intelligent Agency where they were allegedly tortured. Sandeng reportedly went into coma and died on April 16.

The MFWA is worried that Ceesay’s case is sadly taking the course of journalist Ebrima Manneh who disappeared while in detention in 2007. Manneh, a reporter with the Daily Observer, was arrested by plainclothed officers from the National Intelligence Agency (NIA) at his newspaper’s office on July 7, 2006. After his arrest, Manneh was spotted on several occasions being moved in and out of various police stations and detention centres. One year after his arrest, the MFWA received reports that Manneh was hospitalised for high blood pressure at The Gambia’s main hospital and was being watched by paramilitary officers. Despite overwhelming eyewitness evidence that the government arrested and detained Manneh incommunicado, the government has repeatedly denied taking him into custody. Manneh has since not been seen.

The MFWA calls on ECOWAS and AU to independently investigate Ceesay’s alleged escape to ensure the journalist’s safety and also prevent a recurrence of the Ebrima Manneh case.