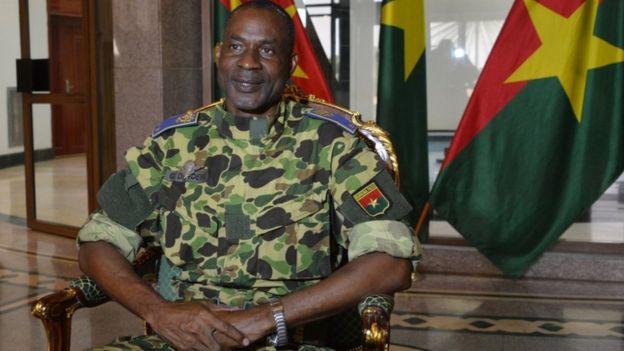 Photo: New ruler General Gilbert Diendere. Credit: BBC
On September 16, 2015, alleged members of former Presidential Security Regiment (Régiment de Sécurité Présidentiel -RSP) of  Blaise Compaore took hostage the transitional President Michel Kafando, together with the Prime Minister Yakouba Isaacs Zida.
The RSP members also took hostage Minister for Housing, Rene Bagoro, and Public Sector Minister,  Augustin Loada.
The MFWA’s correspondent in Burkina Faso reported that following the hostage and reports from the media, the security guards forced radio stations to shut down.
Some members of the RSP reportedly went to the premises of Radio Omega, a private station in Ouagadougou and set fire to the motor bikes of the station’s staff before departing. Out of fear of their premises being vandalised, some radio stations, notably Radio Nationale, Savane FM and Ouaga FM, went off air. The signal of RFI was also cut. The circumstances surrounding this is however unclear.
The insurgents issued a statement in which they declared that they had dissolved the transitional institutions and deposed President Kafando. Radio stations have resumed transmission but the situation is still tense.
On September 17, the insurgents issued a statement in which they declared that they have dissolved the transitional institutions and deposed President Kafando.
The MFWA is concerned at the acts of violence and intimidation perpetrated against the media by the mutinous soldiers, and call for immediate return to normalcy in Burkina Faso. We are calling on the ECOWAS and the AU to immediately take steps to ensure that the situation in the country is resolved amicably to ensure the safety of lives and property.