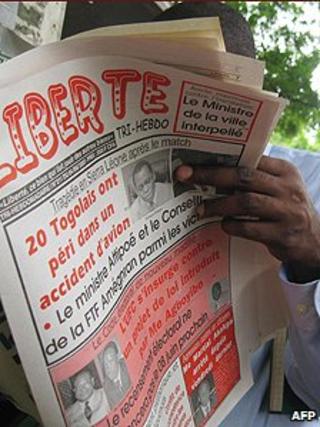 The Media Foundation for West Africa (MFWA) is deeply concerned about the suspension of three newspapers by the Haute Autorité de l’Audiovisuelle et de la Communication (HAAC) for publications the regulator deems to be in bad taste.

The sanctions followed a complaint by the French Ambassador in Togo, Marc Vizy, that an article published on March 3, 2020 by the newspaper Liberté was defamatory. The article titled “Marc Vizy, the Other Enemy of Democracy in Togo”, alleged that the French diplomat supports the autocratic government in Togo.

The L’Alternance newspaper also published an article in which it accused Franck Paris, the Africa Adviser to French President Emmanuel Macron, of interfering in the electoral process in Togo. The said article, published on February 20, 2020, was titled: “Francafrique and Support for Dictators, the cunning Franck Paris.”

A statement released by HAAC on March 23, 2020 said   L’Alternative and Liberte newspapers did not “respect professional rules, and violated the provisions of the Code of Ethics of journalists in Togo, the Press and Communication Code and the Organic Law.”

The HAAC, therefore, suspended the Liberté for fifteen days and L’Alternative for two months.

Following the sanctions, another newspaper, Fraternité, criticised the decision of the regulator as “overzealous”. In response to this, the HAAC on March 30, suspended Fraternité for two months.

The MFWA deplores the suspension of the three newspapers especially during this period of coronavirus pandemic, where the work of education and public awareness by the press is very crucial to the fight against the spread of the pandemic.

While urging journalists to respect the ethics of the profession, we also urge the HAAC to promote the right of rejoinder, instead of the punitive sanction which censors and further weakens the sustainability of newspapers.