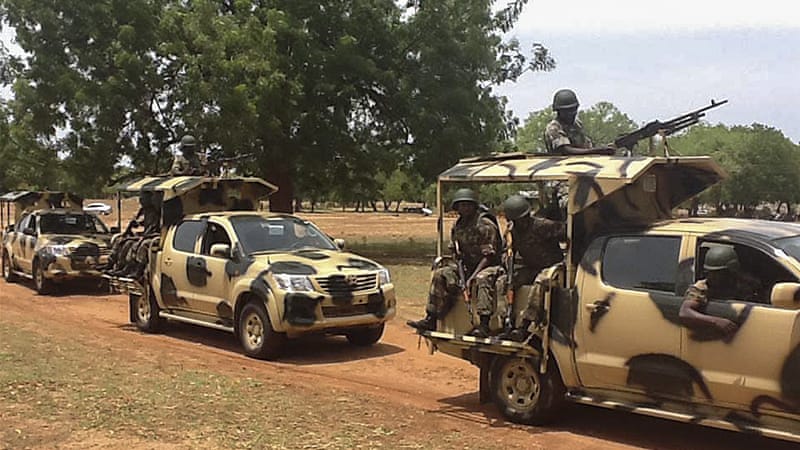 The Nigerian Union of Journalists (NUJ) secretariat in Umuahia, Abia State – Nigeria was on September 12, 2017 ransacked by a group of soldiers who also beat up journalists present at the facility for allegedly covering their parade dubbed “Operation Python Dance Exercises.’’

As the contingent of 200 soldiers in 15 Armoured Personnel Carriers (APCs), 20 trucks and 6 Hilux vans made a stopover at the Abia Tower, where the NUJ secretariat is located, some 20 soldiers suddenly jumped out of the cars, rushed upstairs to the secretariat office and crocked their riffles at the occupants, sending them crouching, kneeling or sprawling in terror.

The men assaulted the journalists, smashed their Ipads, phones and other gadgets on the ground, reported the Premium Times. The soldiers, who were on their way to conduct an operation in the house of the self-proclaimed Biafa separatist leader, Nnamdi Kanu, accused the journalists of filming them.

Mr. John Emejor, chairman of NUJ Abia state confirmed the incident; “Our press centre was invaded by soldiers; two Journalists lost their IPads and phones, while a national leader in the office was attacked. Our stand is that those involved in this attack on innocent Journalists should be fished out and punished in line with the constitution of the Country”, Emejor told punchng.com.

The online journal also reported that the Assistant Director, Army Public Relations, 14 Brigade, Major Oyegoke Gbadamosi, has admitted that the assault occurred and indicated that he had called for pictures of the damaged office.

This attack on journalists at the NUJ secretariat occurred only a month and a week after Uyi Amadin, a reporter with Silverbird TV, together with his camera man, were brutalised by police officers during a protest rally in Abuja. Not only were they beaten but their camera was also snatched and its content deleted.

MFWA strongly condemns the soldiers’ assault on the journalists and the unlawful confiscation of their cell phones. We call on the authorities of the armed forces and other law enforcement units to put in place adequate measures to protect journalists from acts of brutality; to enable them carry out their duties unhindered.