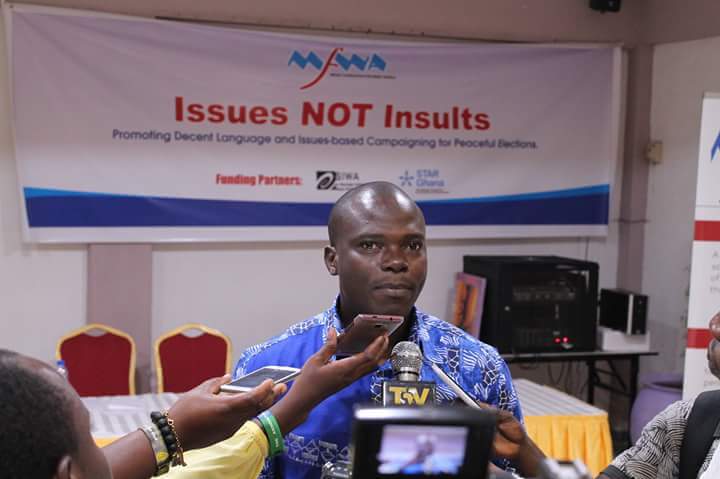 On Wednesday June 29, 2016 one Alistair Nelson made very inciting and threatening comments during the Pampaso programme on Accra-based Montie FM. Despite the seriousness of the said comments, the host of the programme, one Mugabe Maase, allowed them to pass uninterrupted.

In the ensuing public condemnation of the said repugnant comments, there have been several references to and attacks on the Media Foundation for West Africa (MFWA) for, what in the view of many, is the MFWA’s failure to include the said comments in its recent report issued on June 29. We thank both those who sought to draw our attention to the comments and those who have attacked us. In both instances, we see a recognition of the organisation and its work for which we remain grateful.

For purposes of clarification, we wish to state that our recent campaign language monitoring report, which was issued on June 29, was for the period May 16 to 31. Consequently, any comments made on any of the radio stations we monitor after May 31, could not have been part of that report.

It is also important to state that we are monitoring several stations across the country. The processes of receiving reports from dozens of monitors, cross-checking and validating facts, processing and consolidating reports, make it impossible for us to issue daily reports.

However, given the grievousness of the said comments by Alistair Nelson on Montie FM on June 29, we decided to treat it as an isolated case. We have since raised our concern with the Chairman of the National Media Commission (NMC), whose attention has also been drawn to the issue by many other concerned individuals.

We plan to pursue the matter further from Monday. We will be submitting the tape of the entire programme to the Commission. We see this as a test case for the NMC and we remain hopeful that the Commission will assert its authority to promote media professionalism as required of it by our National Constitution.

Our interest in and decision to have the rabble-rousing on Montie FM stopped is based on our conviction that such conduct if unchecked, is detrimental not only to the peace of the country but also to press freedom. We will not relent in our quest to defend and promote press freedom and that requires us to condemn any acts that have the potential to derail the collective efforts at ensuring a strong, pluralistic and professional media environment.

Since the beginning of the campaign language monitoring project in mid-April, Montie FM has recorded a total of 40 incidents of indecent expressions, the highest among all the stations being monitored. In our first report, the station recorded 22 incidents, 16 incidents in the second report and 2 in the recent report.

We call on the NMC, the National Communication Authority, the Ghana Journalists Association and the Ghana Independent Broadcasters Association to take the necessary steps to end acts of unprofessionalism in the media.