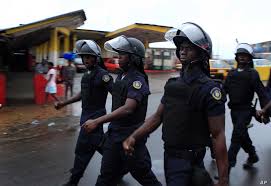 Police in Monrovia on May 12, 2020 disrupted a live Facebook broadcast and seized equipment belonging to the editor of local daily and online newspaper, FrontPage Africa (FPA).

National security forces executing a search and seizure warrant arrested Lennart Dodoo, editor of the FPA, after raiding his home. They disrupted his broadcast and ordered him to delete the nearly 42 minutes of video from the FPA’s Facebook page. The journalist refused to comply with the order. The police consequently seized the phone used for the broadcast.

The police officers also seized a second phone that the journalist attempted to use to call the Managing Director of the FPA newspaper.

“They seized my two phones and when I asked them why, one of the officers said, they had received instructions from their bosses. I don’t know which bosses they were talking about,” Dodoo later told local reporters.

Following condemnations by the media and the intervention of several press freedom organisations, the police returned the two phones hours later.

Later that same day, the police summoned and interrogated Menikpakeh Dumoe, a serial critic of the government over his Facebook post which the authorities said amounted to inciting Liberians to armed rebellion.

After the interrogation, about 20 armed officers of the Liberia National Police and the National Security Agency escorted Dumoe to his residence to execute a “search and seizure” warrant by a court in Monrovia.

When the search was over, the police took Dumoe back to the headquarters of the Liberia National Police in Monrovia.

“We don’t need free bags of rice, I say we the poor people in Monrovia need AK-47s so our leaders can take us seriously,” Dumoe, who is a member of the political pressure group, Council of Patriots, had posted.

Police spokesman, Moses Carter, accused the activist of rallying citizens to take up arms against the government, a charge he denied. Dumoe insisted that his statement was a call on the people to stop taking food bribes from the very people who have impoverished them and taken them for granted. He added that he will never encourage anyone to take up arms against the government.

Meanwhile the Executive Director of MFWA’s national partner in Liberia, the Center for Media Studies and Peacebuilding (CEMESP), Malcolm Joseph has urged the authorities to ensure that Dumoe’s rights are not abused. Joseph also condemned the disruption of Lennart Dodo’s broadcast and the seizure of the journalist’s phone.

The MFWA joins CEMESP in condemning the action of the police and calls on the Liberia National Police to launch an immediate investigation and discipline the officers involved in perpetrating the violations.