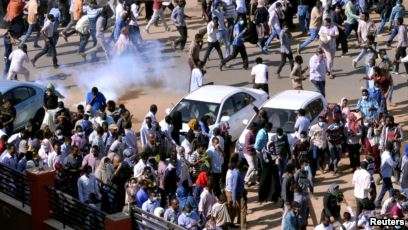 Armed security forces have prevented a peaceful protest demonstration by supporters of opposition parties in Cotonou by beating and dispersing them with tear gas.

“The military and police deployment is deplorable for democracy; people were wounded in the head as a result of beatings; people were brutalised by the military,” lamented Guy Mitokpè, Secretary General of the RE party.

On September 17, 2018, Benin’s government adopted Law No. 2018-23 of 17 on the Political Parties Charter which introduced new regulations. The new law require political parties submit a certificate of good standing issued by the Ministry of the Interior. Many political parties have had their applications for the said certificate rejected by the Ministry, thus preventing them from registering with the electoral Commission to participate in the parliamentary polls.

After repeated criticism of the situation and calls for a moratorium on the implementation of the new regulations had gone unheeded, the affected opposition parties called its supporters to demonstrate, only for them to be assaulted.

MFWA condemns the excessive use of force by the police to disperse peaceful protesters. We urge the authorities to bring the officers involved to book and call on all stakeholders in the impasse to use dialogue to resolve the issues in order to have inclusive and credible elections in Benin.