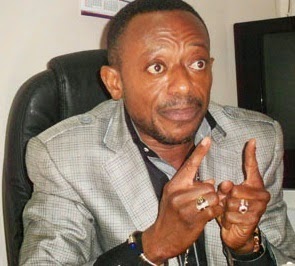 A pastor who was being interviewed in the studio of Hot FM, a private radio station based in Accra, suddenly lost his temper and vandalized some equipment in the studio, amidst insults and swearing directed at his interviewer.

Reverend Prophet Isaac Owusu Bempah, who is the Founder and Leader of Glorious Word and Power Ministry International, was invited to the station on December 13, 2018 to respond to another pastor, Evangelist Dominic Appiah, who had earlier alleged at the same station that certain church leaders in the country, including him (Owusu Bempah) were occult prophets.

In the course of the interview, the host of the ‘Ghana Must Know’, programme, Justice Kwaku Annan, asked the Reverend to perform in the studio one of the several miracles he is known for. The guest however got infuriated by the request and went on the rampage.

“Kwaku you are behaving like Satan who challenged God to perform miracles…Yes, you are a Satan. …I’m not a small boy for you to ask me these insane questions…I swear if you don’t produce Dominic [his accuser], I will sue the station,” the Reverend Owusu Bempah is heard saying in a video of the incident that has been widely circulated.

The rampaging pastor vandalized an apple laptop and a microphone in the studio.

The MFWA condemns Reverend Owusu Bempah’s disruptive behavior at the radio station, particularly when the media house had offered him a platform to respond to allegations made against him. The assault on Hot FM is a criminal offense; we encourage the Management of the station to report the incident to the police.