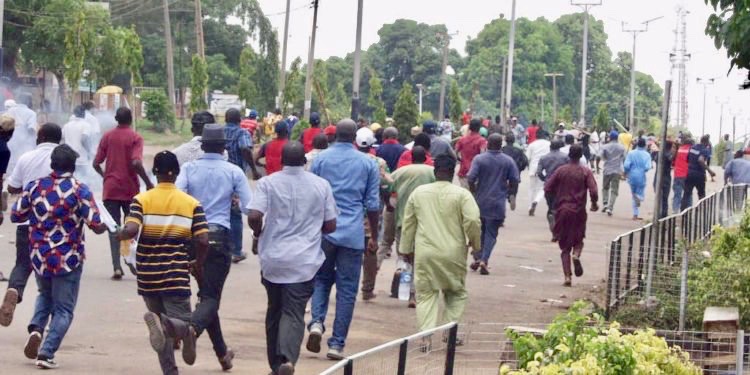 Hired thugs on May 18, 2021, attacked peaceful labour union protesters in Kaduna city, the capital of Kaduna State in northwest Nigeria.

The protest was organised by the Nigeria Labour Congress (NLC) against the mass sacking of workers by the state governor, Mallam Nasir El-Rufai. The governor recently sacked 5,000 workers “unjustly” according to the union, bringing to around 45,000 the number of workers relieved of their jobs since the governor came into power in May 2015.

The NLC embarked on a five-day warning strike beginning Monday May 17, with a massive turn-out that grounded economic and social activities in the state. But on the second day of the protest, some hoodlums arrived in two vehicles and a tricycle to disrupt the protest by pelting the protesters with stones. The chased away many others with knives.

An eyewitness, David Lawal, told a correspondent of the Media Foundation for West Africa (MFWA) that some of the attackers came hooded and armed with knives and sticks. The attack forced the protesters, journalists, and passersby to flee the scene immediately, before the police arrived to chase them away with teargas.

Another protester who pleaded to remain anonymous said “We all suspected the state government is behind the disruption of our protest, which has been peaceful since the first day.”

Meanwhile, governor El-Rufai has declared the national president of the Nigeria Labour Congress, Ayuba Wabba, wanted and ordered his arrest for “economic sabotage”.  The governor blamed Wabba for leading the protest resulted in the “shutting down electricity, coercion and restraints of personal freedom, trespass into public facilities and denial of access to healthcare for several of our citizens.”

“Ayuba Wabba & others of @NLCHeadquarters declared wanted for economic sabotage & attacks on public infrastructure under Miscellaneous Offences Act. Anyone that knows where he is hiding should send a message to @MOJKaduna KDSG. There will be a handsome reward!” the governor posted on social networking site, Twitter.

However, human rights lawyer and MFWA Board Member, Femi Falana, said the governor lacks the power to declare Wabba and other union leaders wanted.

Falana dismissed the claim by El-Rufai that the labour leaders contravened the provisions of the Miscellaneous Offences Act.

“By the combined effect of the Trade Union Act and the Nigerian Constitution, Wabba and other labour leaders have the unquestionable rights to participate in the peaceful warning strike and mass protests against further retrenchment of workers in the Kaduna State public service,” Falana said in a statement.

Also, in a statement on May 18, the Deputy Director of the Socio-Economic Rights and Accountability Project (SERAP, Kolawole Oluwadare, urged the governor to end the alleged harassment and intimidation of labour leaders.

“Declaring NLC leaders ‘wanted’ simply for peacefully exercising their human rights is antithetical to the Nigerian Constitution of 1999 [as amended] and the country’s international obligations. Kaduna authorities ought to protect workers from attacks by thugs. Allowing thugs to disrupt the peaceful protest by workers is illegal and unconstitutional,” Oluwadare said.

The MFWA condemns the harassment and intimidation of peaceful protesters by the Kaduna State government. This attack violates Section 40 of the Nigerian Constitution, which gives every Nigerian the right to assemble freely and associate with other persons.

MFWA also reminds the Kaduna government that Nigeria is a state party to the 1966 International Covenant on Civil and Political Rights. Article 21 of the ICCPR provides that the right of peaceful assembly shall be recognised and that no restrictions may be placed on the exercise of this right. We therefore urge the police and other security agencies to protect the protesters and call on Governor El Rufai to withdraw the arrest order issued against the protest leader.