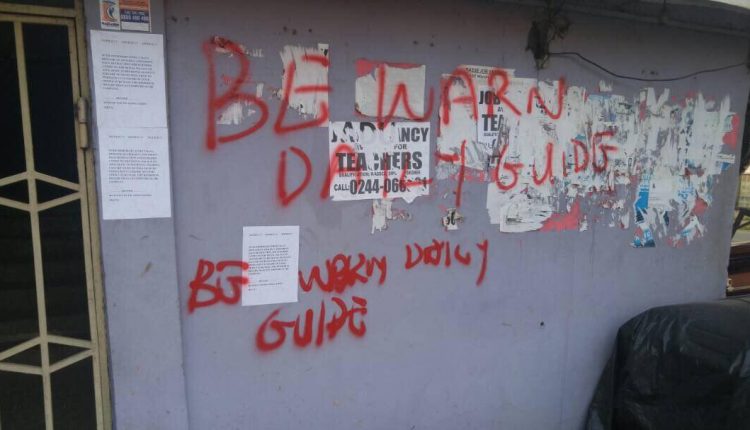 A group of irate youth has attacked the regional office of one of Ghana’s most influential private newspapers, Daily Guide, in the country’s second largest city, Kumasi, over publications carried by the newspaper about a highly respected traditional ruler.

The group calling itself Kumasi Youth Association (KuYA), on October 18, 2017, disrupted work by locking up at the offices of the newspaper located on the top floor of a three-storey building situated in the heart of Kumasi. The thugs demanded an apology from the newspaper and threatened to close down the office permanently if the editors do not retract what the KuYA considers as offensive reportage about Otumfuo Osei Tutu II, the revered king of the Ashantis, Ghana’s biggest ethnic group.

The Daily Guide is among several Ghanaian media outlets which reported the dismissal of a staff of the Ghana International Bank in London over a transaction he had made on behalf of the Asantehene, Otumfuo Osei Tutu II, allegedly, in breach of internal rules. The story was first broken by UK’s Daily Telegraph.

The thugs left behind printed notes and threatening graffiti on the walls of the building, one of which read; “Be warned Daily Guide.”

Meanwhile, the police have reopened the besieged offices by removing the foreign locks fixed by the assailants. A divisional police commander, ACP Kwaku Buah, told Accra-based Joy FM that the police have invited the culprits to report themselves to avoid being hounded out. He added that the KuYA is an unknown group.

The MFWA condemns the attack on the office of the Daily Guide newspaper as an attempt to gag the media house. We urge the police to spare no effort in tracking down and bringing to book all the perpetrators of the shameful attack.