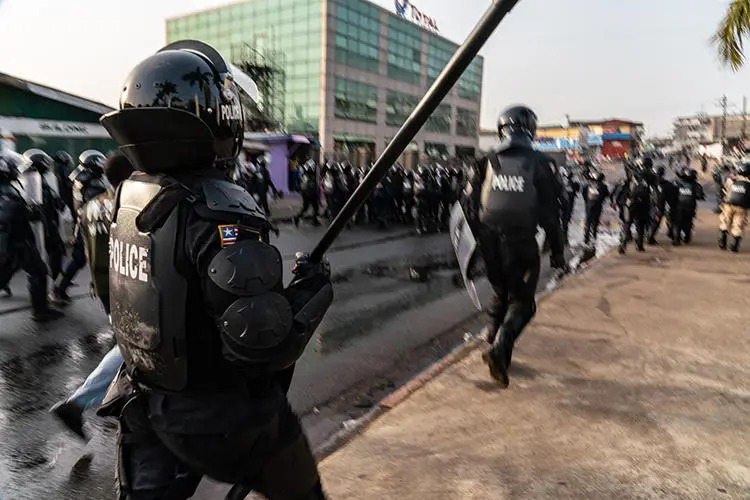 The Media Foundation for West Africa (MFWA) strongly condemns the attacks against two Journalists by security officers and calls on the authorities in Liberia to appropriately sanction the perpetrators.

On June 29, 2022, journalists Emmanuel Kollie of the state radio ELBC and Amos Korzawu of Fortune TV were reportedly beaten by two officers of the Liberia National Police in Foya, Lofa County (northernmost portion of Liberia). The Journalists reported that they were assaulted and beaten in front of the police station while covering clashes between supporters of the Unity Party (UP) and the Coalition for Democratic Change (CDC).

The journalists said that the police officers first tried to intimidate them before physically assaulting them. The officers threatened to shoot them saying, “you guys stop! If anyone moves, we are going to shoot. That’s how we stopped and we were assaulted,” Emmanuel Kollie told the MFWA. He added that he was in agony and battling with pain after the assault.

His colleague, Amos Korzawu, said that their assailants pointed guns directly at them despite the fact that they displayed their identities as journalists. In the phone conversation with the MFWA, the journalist recounted that he was threatened of being shot if he didn’t run. The two reporters, terrified, fled to their hotel and left the following morning for Monrovia, Liberia’s Capital. Mr. Kollie was particularly affected by the incident. He had to take a leave from work to seek medical treatment.

“We are all working for the betterment of society. We should not be intimidated, assaulted or beaten because of doing our work,” Mr. Kollie said.

According to them, they could not clearly identify any of the police officers involved in the attack as they were wearing protective gear. However, Emmanuel Kollie filed a complaint and was told that investigations are ongoing.

Liberia goes to the polls in 2023, and the political temperature is already going high. Clashes between political parties’ supporters are becoming common. The police in the County reportedly arrested seven political party affiliates in connection with the clashes. The party militants believed to be from the two dominant political parties, CDC and the UP, took to the streets each claiming victory.

The MFWA calls on authorities to thoroughly investigate these incidents and prosecute the perpetrators. Journalists should not be hindered from doing their work. While we urge the authorities to avoid abusing the rights of the militants that were arrested in connection with the clashes, we wish to draw their attention to the growing culture of impunity for violations against press freedom.