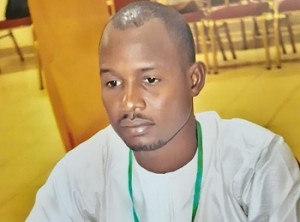 A journalist in Niamey, Kaka Touda Mamane Goni, has been handed a three-month suspended sentence after a judge found him guilty of publishing false news on COVID-19.

On March 4, 2020 Kaka Touda published on Facebook and Twitter that a suspected case of COVID-19 had been recorded at the Niamey General Referral Hospital.

Displeased with the publication, the hospital administration filed a complaint against the journalist at the judiciary police. The police consequently arrested Kaka Touda on March 5, and detained him for four days before securing a pre-trial detention warrant to further detain the journalist.

The hospital authorities issued a press release to deny Kaka Touda’s statement, however, the police did not release the journalist despite report of his deteriorating health.

On March 9, he was taken to court and charged with “dissemination of data likely to disturb public order”. Chaibou Samna, the public prosecutor alleged that, the journalist was arrested because after his publication on a suspicious case of COVID-19 in the hospital, “all the people ran away and refused to go to the hospital”.

On March 26, 2010 a Magistrates Court in Niamey found the journalist guilty “under Niger’s 2019 Cyber-Crime Law and gave him a three-month suspended sentence. The judge also ordered Kaka Touda to pay a symbolic fine to Niamey General Referral Hospital

The MFWA is mindful about the fact that, publication of unverified information in these times of public health insecurity has the potential to create great anxiety. Instead of detaining the journalist for twenty-two days, the court could have ordered him to issue a statement of apology, while spreading information, education and raising-awareness about COVID-19 to his 3,800 followers on Facebook and more than 6,300 followers on Twitter.

In this period of the fight against COVID-19 pandemic in West Africa, protecting press freedom, citizens’ freedom of expression and their right to information is as important as security measures to contain the spread of the disease. The MFWA therefore, urges the authorities to seek ways of collaborating with the media for a successful fight against the pandemic. The organisation calls on journalists, bloggers and all stakeholders to be responsible and circumspect in their public pronouncements and publications on the pandemic and avoid misinforming the public.