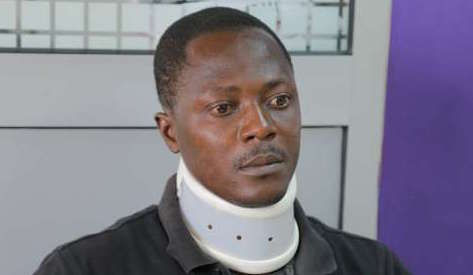 A freelance journalist has alleged that he was brutally assaulted by some soldiers during the celebration of Ghana’s 60th Independence Day at the Independence Square in the capital, Accra.

The journalist, Kendrick Ofei, made the allegation on the popular “State of Affairs” programme broadcast on the privately-owned GhOne TV on March 21, 2017. He said the soldiers spotted him filming them while they were beating a citizen behind the Independence Square.

“After the event (Independence Day parade), I went behind the venue towards the beach. Lo and behold, I saw three military men beating a civilian in a manner that was an eyesore. As a freelance journalist, I took my phone just to get exclusive shot of what was going on there. I had even completed taking it when one of them approached me, snatched the phone and told me to follow him.”

The journalist says the soldiers took him to a place that he believes to be a barracks, where they subjected him to severe beating, with other soldiers joining in the assault.

“The moment I entered the barracks, one of the soldiers shouted that I wanted to spoil their job, so they began to beat me from all angles and then they asked me to delete the video but at the time, the phone was frozen so I was asked to smash my phone with a stone. They kept hitting me with anything they could lay their hands on.”

Kendrick Ofei, who was wearing a cervical collar when he appeared on the programme and showed bruises on his body, said he was saved by the timely intervention of an officer in mufti bearing the name tag W. O Mensah.

Reacting to the allegation on the same programme, Deputy Defence Minister designate, Major Dereck Oduro, said the alleged assault, if true, was unfortunate. He was however quick to caution against concluding that those three men were military personnel, until investigations are conducted to establish the truth.

It is unfortunate that after 60 years of independence and on the day of the independence celebration, such brutality could take place. Such retrogressive acts that serve to repress media and freedom of expression rights should be curtailed so that the gains made so far can be consolidated.

The MFWA therefore calls on the military authorities to investigate the matter and ensure that the culprits are punished and Ofei compensated.